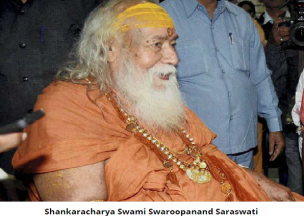 Ram Niwas Purohit | HENB | Ayodhya | Feb 16, 2019:: The Ayodhya (erstwhile Faizabad) district administration has clamped prohibitory orders (Sec 144 CrPc) in Ayodhya in view of a proposed march by Shankaracharya Swami Swaroopanand Saraswati to the city for laying the foundation stone of a Ram temple on 21 Feb.

Additional district magistrate (law and order) P D Gupta said that taking cognizance of the announcement made by some organisations to lay the foundation stone of a Ram temple in the disputed area acquired near the Babri Masjid site, prohibitory orders under CrPC Section 144 have been issued in Ayodhya.

Entry of people to the makeshift Ram Janmabhoomi Temple will be allowed though only one road and all other thoroughfares leading to the site will be closed, according to officials. Any group of more than 15 people will not be allowed to enter the site, they said.

Swami Avimukteshwarananda, the chief disciple of Swami Swaroopananda told HENB, “We will lay the foundation stone at undisputed place near Ram Janmasthan observing the Dharmik rites at any cost on Feb 21.” The Swami also condemned the Yogi govt for creating trouble for the Darshan of Ramlala in a very clandestine manner.

“If BJP-RSS don’t want to make Ram Temple in Ayodhya, they must leave the issue totally. Why they are putting trouble to start Ram Temple by other devout Hindus and Saints,” Swami Avimukteshwarananda added.

The situation of Ayodhya is becoming volatile as time passing fast. Many Naga Sadhus are already took shelters in different Akhadas, temples and Kuthiya in the bank of river Sarayu.

All India Akhada Parishad Chief Mahant Narendra Giri, who is believed to be the head of the most powerful association Hindu Sadhu-Sanyasi-Avdhut-Naga-&-Bairagis, expressed his utter displeasure on Ram Mandir politics by both Congress and BJP. Mahant Narendra Giri vowed ‘Marching to Ayodhya with Naga Sadhus after Kumbh Mela to start Ram Temple in the same way of 6th Dec 1992+ when Hindu retaliation smashed the Babri structure in to rubles.’ Giri categorically stated that ‘BJP govt has no intention to build Ram temple+.’ From various sources it is now confirmed that Sadhus will gather in Ayodhya after Kumbh Mela to start Ram Mandir construction+.

Eariler, 5000 Naga Sadhus took the vow to start Ram Temple in Ayodhya on Ram Navmi (April 14)+ after the Prayag Kumb is over.