The Roots of the Christchurch Massacre can’t be Understood in Hypocrisy, as a ‘Great Replacement’ on the run!

The Failure of World power to eliminate Global Jihad and Islamic Aggression will Rise the Far Rights in Europe. America and everywhere….

We Must Condemn the Mosque Attack. But, Christchurch Exposed Our Hypocrisy Quite Enough! 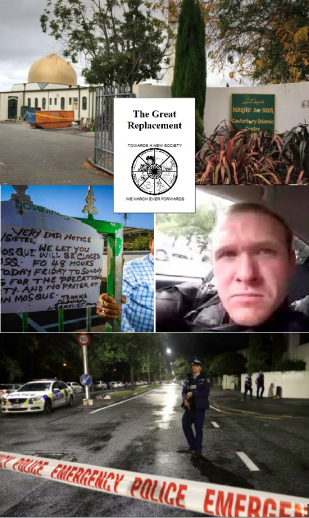 The #CrusadeOfChristchurch gave a clear message that truth prevails in Newton’s 3rd law establishing that every action has its equal and opposite reaction. The aggressive Islamic Expansion in non-Muslim domains and Jihadi insurgency all around have paved this way of #ChristianRetaliation. Now it’s Hallelujah vs Allah ho Akbar. It’s #CrusadeVsJihad in its newest form. As Newton’s 3rd Law Prevails as Truth,  unless Muslims stop Jihadi Terrorism, the Anti-Jihad upsurge will kill common Muslims obviously. We didn’t want 9/11 in NY nor 3/15 in Christchurch, but occurred unfortunately. A far Right Nationalist White Supremacist alone attacked two mosques in Christchurch killing 49 and injuring 30 others.  [See links: Christchurch Mosque Attack [1] [2] [3] [4] [5] [6] [7] [8] [9] [10] [11]] It’s an irony that the far rights in Europe and America are adopting the ISIS global model to put down the Jihad in the dust! This is unfortunate. Peace be upon all.

And here is the ugliest truth that if the States are not successful to check the Islamic insurgency or failed to eliminate Jihad; the perturbed, anxious, aggrieved and agitated individuals may take their extreme way without awaiting for any help from the failed, frivolous, non-impartial and hypocrite authorities in no time.

Brenton Tarrant, a white supremacist who gunned down all Muslim victims with a semi-automatic rifle at the Al Noor and Linwood mosques in Christchurch, conveyed his ideas of Far Right Nationalism in a manifesto called “The Great Replacement” [1] [2] [3] [4], which is obviously concerned with the anxiety, agony, anger of white people against the silent invasion of Islam in Europe, America and Australasia. 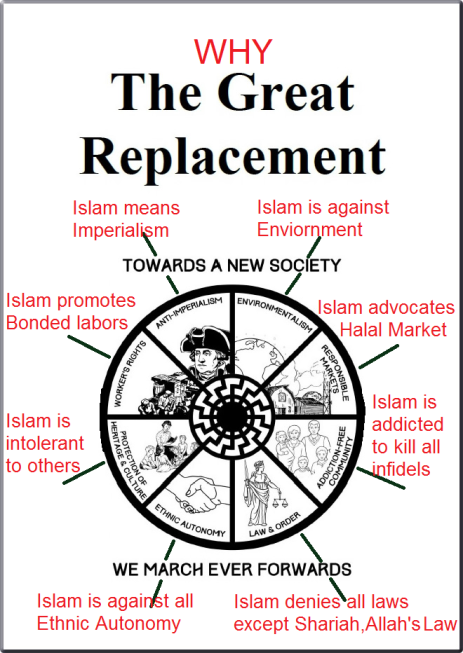 Actually, i) Islam is the tool to spread Arab Imperialism, ii) Islam harms environment for its  taboo against birth control and killing animals at random in religious occasions for their non vegan food habit. Also the excessive use of arms-ammunition-missiles for Jihad and counter-Jihad jeopardize the environment badly, iii) Islam does not believe in modern market economy and want to replace it under a Halal market, iv) Islam is too much addicted to kill the infidels and deals in narcotics and drugs to facilitate Jihad economy,  v) Islam rejects all judicial and administrative system except Shariah law, i.e.  the Law of Allah, vi) Islam does not allow any ethnicity or ethnic autonomy as Islam does not approve any autonomy of infidels in an ideal Islamic situation,  vii) Islam always went intolerant against the Heritage and Culture and still maintains it vandalism against all non-Muslim Culture and Heritage and viii) Islam denies all the rights of non-believers (infidels-kafirs) captivating them as even bonded labours.  In fine the Idealism cherished in The Great Replacement carries a sharp contrast with Islam for which the Carnage in Christchurch occurred.

We must not be inhumane. But, sentiment, sympathy, condemnation, protests, media analysis are gaining momentum in such a way with Christchurch row as it is an unprecedented terror attack on any Mosque or on mass for the first time.

Report shows that only two the victims were of New Zealand and all of the rest were outsiders. That showed a great gesture of Kiwi authorities to accommodate Islam inside the country spending Govt exchequers by the way.

Who can say that we are not caring many dreadful creatures in our own yards in the name of fraternity and humanity when the land of New Zealand is free from any threats of nature and the indigenous people there.

We are welcoming Islam everywhere with warmth. But, what is mode of acceptance for others (non-Muslims)  in Islamic countries? What is the modality of the rise of Jihad in the non-Arabic and non-Islamic land by the way. We are crying for Christchurch endlessly as a ‘Far Right Nationalist’ attacked on two Mosques in New Zealand, but were we at all concerned with the barbaric attacks by Islamist in the name of Jihad in last 10 years? If concerned, how much of that?

We must not forget that during last 10 years (excluding the figures of 1st three months in 2019), there were 23895 Islamic attacks in 100 countries, in which 165935 people were killed and 209142 injured. These attacks include more than 100 Jihadi attacks on Mosques killing Muslims only. But, Christchurch is presented in a way that a Mosque is attacked for the first time and humanity is shaken for that. With others, Muslims also took the street in a protest of Christchurch massacre. But why these protest brigades in the row of Christchurch were untraceable during last 10 years when Islamic attacks killed more than 165935 innocent persons injuring another 209142 in the name of Jihad of a Religion of Peace!

How many Muslims came to the streets then when US, UK, France, Germany, Russia, Sweden, Spain and India faced the Jihadi attacks in its extreme brutality!

List of Killings in the Name of Islam or ‘The Religion of Peace’ in last 10 yrs.

The identity and culture of Europe have been challenged vehemently. That’s the picture of America also. Islam is invading Europe and America upon the generosity of the citizens there. But, Muslim migration, influx, uncontrolled birth rate, Mosques and Madrasas, Sharia Law Courts and Halal Business, capturing white women and girls, Islamic criminality in the shape of rape, murder, loot, arson, attacks, vandalism,  IS indoctrination in the mindset of Muslim youths are common practices loved so much by the Quran followers. And all these Islamic ‘virtues’ are posing a Pan-Islamic threat perception upon the endangered European and American populace with separate culture and identity. World is facing this Islamic crisis everywhere as it challenges the Non-Muslims obviously to make them surrender to Islam and always negating and deleting the faith and culture of others. The unbelievable 2-4 fold increase of Muslims in numbers in Europe and America is hinting an Islamic majority in many places there by 2050. This serious concerned is revealed in PEW reports as another spate of Islamic invasion in Europe and America. [1] [2].

In this critical crisis, the anti-Islamic repercussions, even in the shape of White Supremacists are not unexpected as many of the European and American youth and mass are trying to get rid of the Islamic strangulation frantically. When the world powers are failed to check the Jihadi threats and Pan Islamic imbalances, the public retaliation in the line of Christchurch is most obvious. This will be the future story of majority parts of the world.

If the state authorities and heads are not serious enough to neutralize the Islamic upsurge and upheaval in their respective countries efficiently, there would the many Christchurch in every corner of the world with more head counts of Muslim dead bodies!

The Failure of World power to eliminate Global Jihad and Islamic Aggression will Rise the Far Rights in America and Europe. Hence, the conflict between Jihad and Crusade ultimately destroy the world peace.

First of all, we have to recognize and diagnosis the problem. Otherwise, the hypocrisy to honor Great Islam and Good Muslims without condemning the silent Muslim mass support for Jihad and Pan Islamism, will lead us to surrender the whole civilization before Islam.

But, message of Christchurch does not bear any sign of surrender before Islam. It declares the war against Islamic aggression and supremacy in Europe, America and Australasia. Such a war between Jihad and Crusade will destroy world peace and prosperity.

We must stand together not for the glorification of Jihad or condemning the White Supremacist ideas without finding its root cause. World can’t survive without peace and prosperity and we must find all deterrent and detrimental root causes of it in a very un-hypocrite  way. Then we will find the most dangerous root cause of Jihad to grossly affect the global peace and prosperity.

People dislike hypocrisy. They want Peace, Prosperity and Harmony. Humanity must prevail finally, not the Jihad or Crusade.

__Inputs from links used above and TROP.

Writer can be reached at his email: upananda.br@gmail.com

8 comments on “The Roots of the Christchurch Massacre can’t be Understood in Hypocrisy, as a ‘Great Replacement’ on the run!”