Upananda Brahmachari | Haridwar | HENB | April 8, 2019:: The days of respecting veterans in the BJP is vanished in a  flaunt of promoting youth leadership. In a guise of ‘Young India’, BJP denied its stalwarts like Lal Krishna Advani and Murli Manohar Joshi for contesting Lok Sabha Elections in 2019 for crossing their age beyond 75 years and now, the present Modi-Shah leadership in BJP have exposed their agenda to suck all the lights of importance and prominence only for them, even expunging the pictorial presence of Advani, Joshi and even the first PM from BJP, late Atal Bihari Vajpayee in the cover of their election manifesto. Fortunately, a picture of Vajpayee is set on the back cover page along Shyama Prasad Mukherjee and Deen Dayal Upadhaya.

In 2014 BJP Lok Sabha Manifesto+, pictures of Advani and Joshi both were placed in the cover page of that (along with other nine BJP leaders). But, as they are no more any source of inspiration perhaps for the party men, they have been expelled from the pages of BJP manifesto. Since, the only inspiration of BJP is now PM Modi, his picture is only printed in the cover of 2019 manifesto and his pictures have been printed all through it multiple times.

This paradigm shift of present BJP leadership may hurt the sentiments of the veterans of BJP and many BJP workers who joined the party under the influence and leadership of Advani or Joshi, but the BJP’s exercise on Hindutva agenda as reflected in the 2019 BJP Lok Sabha Manifesto+ obviously shocked the millions of Hindu voters who thought BJP a party for Hindutva ideology.

In 2014 Election manifesto, BJP promised for Ayodhya Ram Temple by saying, “BJP reiterates its stand to explore all possibilities within the framework of constitution to facilitate the construction of Ram Temple in Ayodhya.”

The people of India know the bluff of BJP as the party did not move an inch in positivity to facilitate the construction of Ram Temple in Ayodhya. Rather, BJP always avoided the issue in last five years saying the matter under subjudice. Even, PM Modi could not manage any time to visit the Ram Temple in Ayodhya for once, but he visited a mosque in Indore and several places of religious interest.

Now, again in the trail of exercise of news phrases and words, BJP again made a false promise for Ayodhya Ram Temple, by saying, “We reiterate our stand on Ram Mandir. We will explore all possibilities within the framework of constitution and all necessary efforts to facilitate the expeditious construction of Ram Temple in Ayodhya.” 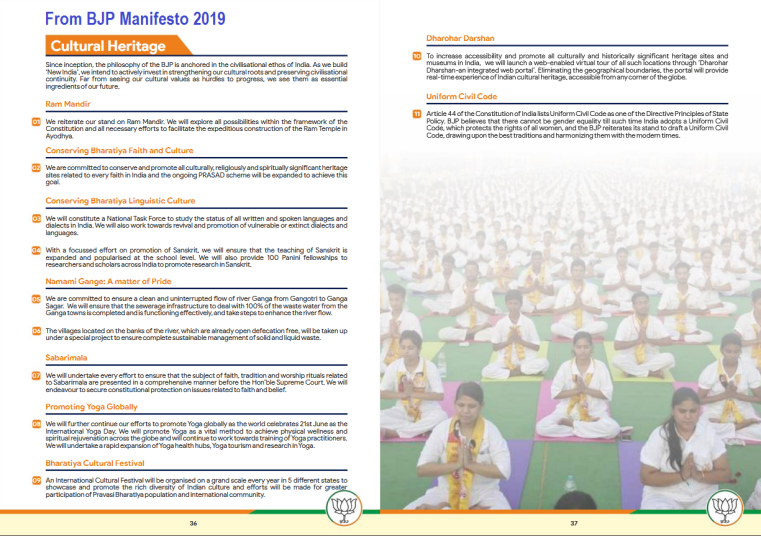 It is ridiculous that BJP had failed to get any speed to Ram temple race for Ayodhya in last five years. Now they are telling a ‘expeditious construction’ of it. How funny and another ‘Jumla’ (absurd assurance in the extempore) by Modi-Amit Shah. When BJP in absolute majority with 282 seats (NDA 336 seats) in Lok Sabha failed to start Ram Temple any way during 2014-2019, how BJP will do it when their seats will come down to 250 in Lok Sabha in 2019 and NDA won’t be able to cross 300 mark?

Actually, BJP turned down Ram temple issue in low priority in their development dole drum. BJP knows it very well, they will not be able to construct Ram Mandir in Ayodhya and even they haven’t right intention to do so.

In the ”75 milestones for India @ 75” chapter of BJP 2019 manifesto, BJP has declared its top 75 programmes to complete those by 2022, the 75th year of  Indian independence. Construction of Ram Temple is not included there in 75 programes and projects anyway.

Not, only with the Ram Temple issue, BJP exploited the Hindu sentiments in 2014 for making assurance for the protection for ‘Cow and its progeny.’ The report card BJP for Cow (Bos Indicus) Protection and effort to make a central law on banning cow slaughter were not good. Now, the matter of Cow Protection or the issues directly related with protection of Cow, have completely dropped in the 2019 BJP manifesto, very unfortunately.

Even, BJP deleted the Ram Setu issue of 2014 in 2019 manifesto. The matter of declaring Ram Setu as national Heritage as demanded by Dr Subramanian Swamy is intentionally kept pending by union govt! Now, under a hit and run policy, BJP incorporated Sabarimala issue anew in their manifesto to exploit the Hindu sentiments of Malayali Hindus in Kerala.

Though this 2019 Manifesto of BJP used strong words in case of repelling Art. 370 and 35 A of constitution, that does not fit with the track record of BJP in last five years. BJP took a very unjust mode of action to deal with Kashmir issues along with rehabilitation of Kashmiri Pandits and ruled the state objectionably with PDF in an unholy alliance.

Hindus are also dissatisfied with BJP for the infiltration issue, even the BJP Manifesto addressed the same well, as BJP could deport only seven Rohingyas in their rule of last five years, when the number of such infiltrators have been doubled in this period.

BJP inserted the Sabarimala issue in this Manifesto for their political gain in Kerala, but the party did not assure the Hindus to remove all demonic control of Govt boards upon the Hindu Temples all over India. This is a pertinent point of Hindu demand, but BJP rejected that in its drastic way of development. 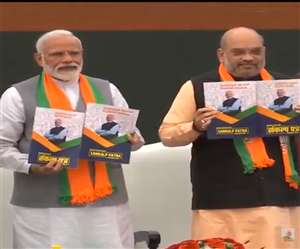 As the 2019 manifesto of BJP is a concocted story of development and canvassing a one man show denying the joint responsibility of Leadership in one hand; on the other hand, the BJP 2019 Lok Sabha Election Manifesto is skeptic on Ram Temple Construction and Cow Protection to hurt Hindu sentiment. The issue of Ganga cleaning as assured in 2014 and reassured in 2019 manifesto are clear lies. It’s a Ganga Ghotala (scam)+!

In the matter of Uniform Civil Code, Modi government had asked the Law Commission to “examine” the issue of implementing it. But, afterwards Modi Govt engaged themselves with the issue of Triple Talaq and abandoned case of UCC, even after the law commission took suggestions and opinions on UCC from the citizen through public notification.

The 2019 Manifesto of BJP has completely failed to meet the Hindutva aspiration in all respect.

There are many lies and false stories about Modi-fied development seen in BJP’s 2019 manifesto. But, for the betrayal of BJP with Ram Temple Construction, Cow Protection and Ganga Conservation, they have to pay severely.