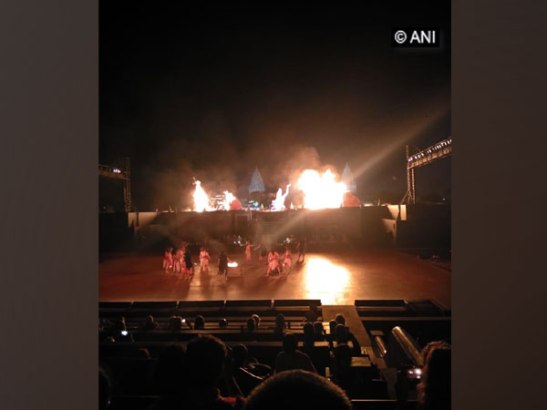 Through murals and ballets, Hinduism being kept alive in Indonesia.

Srinidhi Gopalakrishnan |  ANI | Yogyakarta (Indonesia) | June 21, 2019: It is widely known that Indonesia was once ruled by a Hindu kingdom. However, centuries after the fall of that kingdom, the values of Hinduism  are still being preserved by locals in the region.

In many parts of the country which has a predominant Muslim (approximately 83 per cent) population, Hindu temples, scriptures, murals and sculptures of Hindu gods and goddesses are still preserved.

In an interaction with ANI, officials from the Ministry of Tourism said Sanskrit words are weaved into the local language.  An example of this, an official said, is the motto of the Indonesian Navy – JalasyevaJayamahe – which  is coined from Sanskrit.

Another major attraction in Yogyakarta city for locals and tourists alike is the musical rendition of the epic tale Ramayana that is performed at regular intervals at the historic 9th century Prambanan temple, which is now a UNESCO world cultural heritage.

While the storyline has not been altered, Indonesian music and dance is used to narrate the tale, thereby giving it a local flavour.

With snippets from the tale being projected on screens in English as well as the local language, the story is narrated using music, dance and facial cues. Dressed in traditional Javanese attires, the ballet is one that perfectly describes the tale.

The influence of Ramayana is seen in Prambanan as well, where walls of the temple contain murals depicting the mythological story of Lord Rama and his heroics.

By establishing a connection with Hinduism, officials believe that tourism and an exchange of culture between India and Indonesia can largely flourish.

4 comments on “Performing Art and Cultural Roots of Hinduism still alive in Indonesia.”