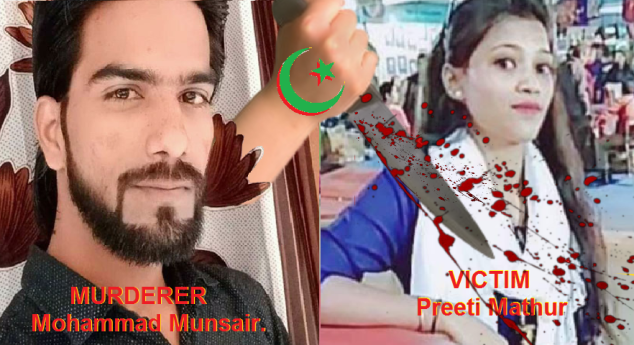 Preeti Mathur, 21, was stabbed several times in the middle of a crowded market in Bhogal area of Jungpura by a man identified as Mohammad Munsair.

The accused Munsair, 25, was caught by the passerby and thrashed. He was later handed over to the police.

The local residents claimed that the accused even tried to stab people when they attempted to stop him.

According to a report, the incident happened around 7.30 pm when the accused met the woman near Bhogal bus stand.

As the accused was trying to escape, people caught and thrashed him.

I hit him with a plastic stick but he kept stabbing the woman. Finally, when I tried to remove him with my hands he attacked me also, but by the time he had stabbed the woman on her neck and she had collapsed on ground, said Mr Lal, an eyewitness to the incident.

Arvind, a salesman said he saw a girl who ran for her life and rushed towards a shop, but before she could climb up the stairs of the shop, the man caught her and stabbed her several times.

She kept begging for help and expecting locals to save her+, but the man was so brutal during the attack that no one dared to come forward, said Mr Arvind.

Preeti, who had been stabbed eight times, was brought to AIIMS Trauma Centre, around 7.5 kilometer away, she had died.

The accused has been arrested under section 302 of the Indian Penal code (IPC) and was produced before a court for judicial custody.

According to the victim’s family, the girl was pursuing BA first year from correspondence. And her elder brother is an autorickshaw driver and other three brothers work as labours.

I want him to be hanged for killing my sister, said said the brother.

The accused Munasir, an unemployed man who had earlier worked at Safdarjung Hospital as a sweeper on contract.

Chinmoy Biswal, DCP (south-east), said that the accused and the woman used to live in the same locality in Sarai Kale Khan area and knew each other well. But their friendship came to an end following a rift.

In the meanwhile, the Delhi Commission for women (DCW) has issued a notice to Delhi Police seeking detailed report on the brutal murder of a young girl+ in Bhogal area on Friday.

The numbers of murder of Hindu girls by their jilted lovers are increasing in Delhi and it suburbs in an alarming situations.