Milind Parande in a Advocates’ meet in Kolkata on NRC. (Pic. HENB).

Hindus are vulnerable in West Bengal. Trinamool Congress (TMC) regime has turned Bengal into a hub of ‘Love Jihad’…

Rakesh Pandey | HENB | Kolkata | Sept 26, 2019:: The Viswa Hindu Parishad (VHP) hit out Wednesday at West Bengal Chief Minister Mamata Banerjee for creating panic over the National Register of Citizens (NRC). It said her comment that FIRs would be filed in case of loss of requisite documents is indulgence to infiltrators.

Mamata Banerjee’s comment is detrimental to national security, VHP international secretary general, Milind Parande said. He alleged that Bengal under Trinamool Congress (TMC) regime has turned into a hub of ‘Love Jihad’ and urged Banerjee not to oppose NRC in the state and the country as it is a much needed exercise to secure the country and weed out Muslim infiltrators. 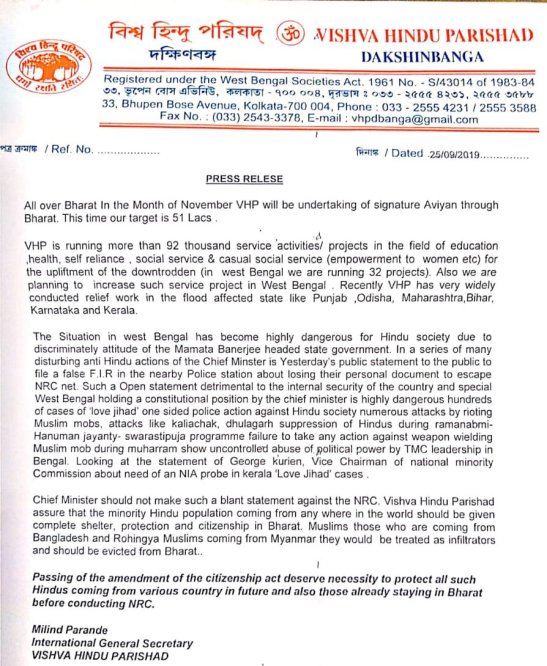 ‘Love Jihad’ is a term used to describe alleged campaigns in which Muslim men target women belonging to non-Muslim communities for conversion to Islam by feigning love.

Milind Parande said at a press conference here that hundreds of cases of ‘love jihad’ have been reported in West Bengal and accused the Mamata Banerjee-led government of one-sided police actions which have resulted in riots between two communities in various parts of the state.

“The situation is highly dangerous for the Hindu society due to the discriminatory attitude of Mamata Banerjee’s government in West Bengal. The Chief Minister in an open statement is asking the people to file FIRs on losing their personal documents – this is very surprising,” Milind Parande said.

“It signifies that even if a document is not lost an FIR can be filed. This will only give indulgence to infiltrators,” alleged Milind Parande indicating the vulnerable situation of Hindus in the state. ‘Anti-NRC move of Mamata Banerjee is aimed to endanger Hindus in Bengal,’ Parande added.

The VHP leader asserted that Mamata Banerjee should stop making statements opposing the NRC. “NRC is a must. Crores of infiltrators are eating into our limited resources. This can’t go on – it has to stop. We want NRC to take place and it will happen. Without NRC, the Hindus in Bengal will be under the control of Jihadi people as per CM’s choice,” Parande said adding VHP will take up an awareness programme in West Bengal on the issue.

Some 150 advocates from Calcutta High Court and South and North 24 Parganas District Courts also assembled in Kolkata for an interactive discussion with Milind Parande over their concern of NRC in Bengal.

__With inputs from PTI.