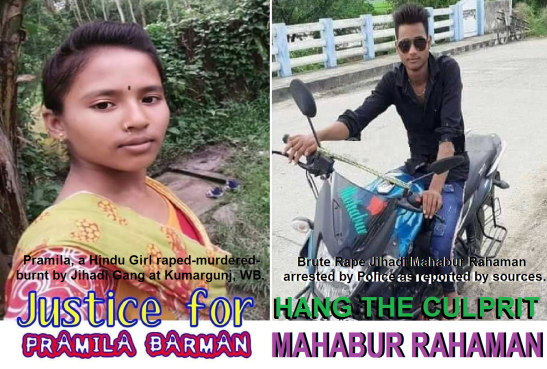 A body of a young girl was found in an open field under a culvert which is said to be nearly 90 per cent burnt. Reports say that stray dogs were playing with the body parts and locals found smokes coming out from the culvert holes.

The police have recovered the body and sent it to Balurghat District Hospital for an autopsy. Prima facie it reveals that the woman might have been gang-raped, body cut into pieces and then set on fire.

However, the police are yet to ascertain the angle of rape.

Off late it has come to know that the minor girl was identified as Pramila Barman a Hindu girl student of class Xth Standard of a local school who went to Fulbari Market on Sunday noon to buy a winter scurf and went missing till then.

On Monday morning, the local farmers who went to fields first gazed the horrific scene and buzzed an alarm to the police.

One Mahabur Rahaman a local Muslim goon was arrested by Kumargunj Police as a prime suspect of the Pramila Barman rape-murder-burn case on Monday.

Sources also said that Mahabur had developed a relationship with Pramila and Pramila were denying that relationship as Mahabur was keeping illicit relations recently with many other girls at a time.

Social media trend as “Justice For Pramila Barman” demands the “Hang of Mahabur Rahaman” in public.

Read this news in Bengali:

It is learnt that the prime accused Mahabur Mia (alias Mahabur Rahman) is a resident of Panchagram, Gangarampur and other two associates of Mahabur viz, Pankaj and Gautam Barman are residents of Krishnabati and Mushapara village of Tapan Block.

Sources divulged that Mahabur hatched a ‘Love Jihad’ ploy with the victim Pramila Barman about a year ago and tried to take her away from Kumargunj-Fulbari area to Goa for engaging her in Dance Bar and escort services.

Knowing a chance of exploitation Pramila was trying to make a distance from Mahabur which enraged Mahabur into an extremity to rape-kill-burn the victim Pramila Barman.

Mahabur is reportedly engaged in tour and travel services in Goa for last couple of months. Hearing the news of the marriage-engagement  of Pramila in some other place, Mahabur returned to Kmargunj from Goa some days before.

From reports it is revealed that Mahabur engaged his friends Pankaj and Gautam to keep watch on the movements of Pramila and finally grabbed her in the afternoon of Sunday (Jan.5).

Overpowering Pramila with the help of ecstasy pills, Mahabur raped Pramila overnight like a beast in a hide of the piles of thatches and invited Pankaj and Gautam to join him.

In some stage Pramila lost her all senses and fell unconscious. Then the Jihadi spirit to kill a kafir girl raised in a Momin Mahabur. Mahabur then took out a sharp knife from his hips and slit the throat of Pramila. After that the burnt the body of Pramila with the petrol of their motorbike under a culvert near Belkhore-Pakurtala in the nightfall.

On next morning the local farmers noticed that some stray dogs were fighting with the charred body parts of the victim. Getting the news from local inhabitants, the Kumarganj police reached to the spot and arrested the suspects within 24 hours.

The family members and local people pressed  for a trail in fast track court for the Pramila Barman rape-murder-burn case and demanded hanging of the culprits.

The agitated public and students blocked NH 512 Balurghat-Gazole around Kumargunj on Tuesday to register their protest against Pramila Barman rape-murder-burn case.

___Inputs from Agencies and Dainik Jugsankha.