After Ayodhya, Kashi, Mathura and Bharat Hindu Rashtra Next….

Upananda Brahmachari | HENB | Haridwar | Aug 16, 2020:: In this Covid-19 Pandemic situation, social distancing and various restrictions, 9th All India Hindu Rashtra Adhiveshan concluded  in the span of  6th Aug to 9th August successfully  through online in its main phase. The preparatory phases (workshops and discussions) were also completed through online mode connecting many Hindutva activists and nationalist organisation from 2nd August to 5th August. All India Hindu Rashtra Adhiveshans are conducted by Hindu Janajagruti Samiti (HJS) and Sanatan Santha (SS), annually for the establishment of Hindu Rashtra in India within 2025. While more than 25 dignitaries/participants from 15 states joined in this online convention, millions of viewers observed it through HJS’s facebook, twitter and youtube platforms.

“Three promises have been kept such as ban on ‘triple Talaq’, withdrawal of Article 370 and Shriram Mandir and 3 things are left now which are, construction of Vishwanath and Shrikrushna Temples at Kashi and Mathura respectively and lastly, establishment of undivided Hindu Rashtra ! Undivided Hindu Rashtra cannot be established just with words but it requires actual action, taken in a lawful manner; for which we will have to follow the path shown by Chhatrapati Shivaji Maharaj and Dharmaveer Sambhaji Maharaj. There will not be attacks on Hindu Dharma in Hindu Rashtra through cow-slaughter, love jihad, land jihad etc. Hindus should now wake up, unite and take active part in the mission of Hindu Rashtra”, was a comprehesive appeal made by devout Hindu activist and BJP-MLA Shri. T. Rajasingh from Telangana while addressing the concluding session of ‘On-line’ Ninth all-India Hindu Rashtra Convention on August 9. Sanatan Sanstha’s ‘Dharmaprasarak’ Sadguru Nandkumar Jadhav spoke on the topic of ‘Paratpar Guru Dr. Athavale’s omniscience and Sadguru (Dr.) Charudatta Pingale, national Guide of HJS gave future directions on facing the forthcoming period of crisis.

Shri. T. Rajasingh gave information on activities related to protection of Dharma undertaken during last year. He said, “Not a single cow was slaughtered on this Bakri Eid as a result of efforts made by Hindus to prevent cow-slaughter. Few calves were however, slaughtered; but we are striving hard to completely stop even that. Few fanatics were trying to illegally convert a place into a mosque in Ambarpeth area but we foiled their attempts. 100 cows were killed in Andhra Pradesh. We went to the place of incident and demanded conducting an inquiry into the same. It was found in investigations that poison was sprayed on the grass where cows used to graze. Efforts are going on to bring Hindu youth together and associate them with the mission of Hindu Rashtra.”

Conspiracy to make Hindus impotent through the medium of delivering food at home !

Hindus are becoming lazy day by day. They order food ‘on-line’. If the person ordering food is a Hindu, it was shocking to find that a certain chemical was mixed with his food which could make him impotent. It is a conspiracy to make Hindus impotent.

He was speaking at the concluding session of the Ninth All-India Hindu Rashtra Convention organised by Hindu Janajagruti Samiti, held online. The Convention was viewed LIVE by an audience of over 64 thousand whereas the subject reached over 2 lakh 47 thousand via Samiti’s official YouTube channel and Facebook page. 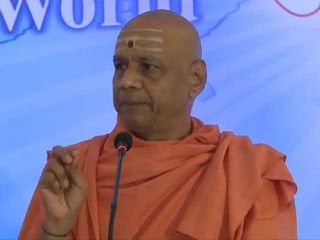 Tradition of ‘Hindutva’ has always been followed in this country. Chhatrapati Shivaji Maharaj had also established Hindu empire. Leaders ruling over this country after independence, however, promoted anti-Hindu ideologies. They worked as if secularism meant anti-Hinduism. Hindus have never attacked others; nor have they opposed to others’ ways of worshipping; but invaders attacked Bharat to eliminate Hindu Dharma; therefore, it is going to be the duty of every Hindu to maintain Bharat as a Hindu Rashtra; for which it is necessary to bring ‘Hinduism’ in governance as advised by Swatantryaveer Savarkar. Leaders working for protection of Hindus’ interests should only be in power. This nation should be run only by those people who have Hindus’ interests in mind because Hindus never attack anybody. They basically believe in following laws and in equality; but as stated by Swa. Savarkar, Hindus have become victims of their own good qualities and invaders took advantage of them and attacked our country. Only ‘Hindutva’ believes in equality; therefore, there is dire need of rulers who will protect all symbols of our identity and honour. We should continue to support such rulers who are protecting ‘Hindutva’; strengthen their hands with our support. There is therefore, need for promoting ‘Hinduism’ in politics and training all Hindus to be good soldiers. We should become capable of retaliating with the same strategy used by our aggressors. If the attack is through a pen, we have to develop the ability to give a reply with a pen. Today, Hindus are attacked through different ideologies; therefore, we need warriors who would be able to fight those ideologies at ideological level. Alertness and unity is most essential to give apt reply to such attacks. The above guidance was given by His Holiness Swami Govindadev Giri Maharaj, the Treasurer of ‘Shri Rama-janma-bhoomi Teerthakshetra Trust’ while addressing Hindus in ‘On-line’ Ninth all-India Hindu Rashtra Convention. He said further, “We should give apt reply to every attack on us for which Hindus’ intellectual capacity needs to be awakened; because if that is not done, we will fall prey to the false propaganda of how non-Hindus are being treated unfairly in this country. Such awareness is being created by Hindu Janajagruti Samiti and Sanatan Sanstha and I respect their work.” 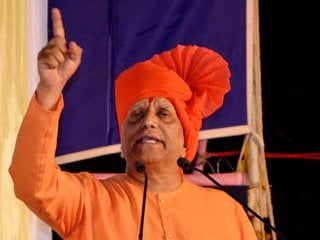 Sanatan Sanstha’s Dharmapracharak, Sadguru Nandakumar Jadhav said, “As per God’s word, ‘My (God’s) devotees will never perish.’ Although political leaders are equipped with the required mechanism and materials, they are incapable of protecting the masses – we’re experiencing this. The almighty, however, comes running to the call of the devotee. Therefore, to protect yourself in the oncoming times of adversities, become a devotee of God and help others in their spiritual practice, too.”

Hindu Janajagruti Samiti’s National Guide, Sadguru (Dr.) Charudatt Pingle said, “In the current times of adversities, the world is on the brink of Third World War. Post the Corona outbreak, several countries have united against China. Once the world war breaks out, there is a strong possibility that the anti-national forces will conspire to incite domestic fights based on caste and religion, as seen in Delhi riots, Shaheen Bagh protests, and the violent anti-CAA protests. To counter this oncoming chaos, it is important that devout Hindus train themselves in first-aid, emergency services, civil defence, etc. in order to be able to handle emergency situations. As per the prophecy of time, the establishment of Hindu Rashtra in 2023 is inevitable. To contribute to the cause, is spiritual practice.”

The Convention also featured online group discussions held to decide the future course of action on various topics related to Rashtra and Dharma. Hundreds of devout Hindus from across the country who participated in this online discussion were split into 16 sub-groups. Towards the end of the Convention, Shri Prashant Juvekar, Convener, Jalgaon district (Maharashtra), Hindu Janajagruti Samiti, read out a resolutions from the viewpoint of Hindu Rashtra. Each of these resolutions were passed with a unanimous support, in the form of a thunderous roar of ‘Har Har Mahadev’, in addition to the viewers posting ‘Har Har Mahadev’ in the comment box.

1. Ensure that the Ram Mandir being constructed in Ayodhya imparts Dharma-related education to Hindus. Other temples and monuments and sites of historic importance in the region be restored. Construction of religious structures belonging to other faiths be disallowed to prevent communal disturbance.

2. The ‘Places of Worship Act 1991’ that denies Hindus their basic rights be promptly abolished. Like Ram Mandir, thousands of Hindu temples including Kashi and Mathura, and land that were usurped by Mughal invaders be handed over to Hindus.

3. The Centre make amendment to the Constitution by replacing the word ‘Secular’ with ‘Spiritual’, in addition to declaring India a ‘Hindu Rashtra’.

4. The Convention wholly supports the demand of Nepali Hindus to declare Nepal a ‘Hindu Rashtra’.

5. The Centre take into consideration the strong sentiments of the Hindu society and approve conclusive laws for a nationwide ban on cow-slaughter and religious conversion.

6. The atrocities on Hindus in Pakistan, Bangladesh and Sri Lanka be investigated by the government of India and the International Human Rights Commission, in addition to providing protection to the minority Hindus.

7. A Union Territory by the name of ‘Panun Kashmir’ be formed in the Kashmir valley to rehabilitate displaced Kashmiri Hindus.

8. Stop the government takeover of Shri Nataraj Mandir in Tamil Nadu and follow the apex court’s ruling of abolishing the government’s control over temples across India and hand over the managerial powers to the devotees.

9. A ‘Central Commission for Naming’ be formed with immediate effect to revert the names of the cities, towns, roads etc. currently named after foreign invaders, to their original names.

11. A law be formed to send back Rohingya Muslims currently sheltered in Delhi, from the viewpoint of national security.

12. The key conspirator of Delhi riots, Tahir Hussain of AAP and all those responsible for violent protests to oppose CAA, NRC etc. be tried under UAPA.

13. Taking into account the explosion of non-Hindu population, the Population Control Act be implemented with immediate effect to keep the demographic balance in check.

14. In the presence of government regulatory bodies such as FSSAI and FDA, the prevalent ‘Halal certification system’ that creates a parallel economy based on religion be banned with immediate effect.

15. To serve justice to devout Hindu leaders currently in jail despite no evidence against them, a fast-track court be established to tend to cases involving them.