Delivery of beef stew instead of chicken in Kolkata. Hindus ready to boycott Zomato in fury.

Hindu Customer cheated in Kolkata as Zomato delivers beef instead of chicken as supplied by Arafat Restaurant. Hindus are ready to boycott Zomato unless apologize in public. 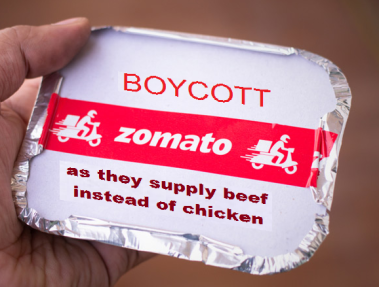 Seema Dutta | HENB | Kolkata | July 17, 2021:: Dining out is a new life style of cosmopolitan and even urban areas  or ordering food stuffs online from reputed food chains to avoid the cooking hazards in home or to make a fun and to that point of constraint when cooking is next to impossible.

Hindu Customers like to find ‘No Beef’ tag in hotels and restaurants and other food marts and supply chains, who don’t consume beef at all due to their faith but frequently they have to face another tag of ‘Halal’ – meaning of which is not known to them at all.

Halal is an Islamic bullying on others faith and economics as per Sharia indoctrination. When it comes to meat, the animals are being slaughter swiping with a sharp knife across the animal’s neck, severing the trachea, jugular vein and carotid artery. The animal must be slaughtered in the name of Aallah saying ‘Bismillah’, turning its head towards Kaba. This is a most painful way of slaughtering of animal to please Allah according to Islamic faith. Muslims don’t take Non-Halal meat. But, Hindus are also forced to take this Halal meant in maximum of hotels, restaurants and food chains, even they ask  Jhatka meat (the one sharp strike to cut the animal on neck to produce a minimum pain of moment), however not available easily.

Anyway this double tagging and ‘Halal and No Beef’ creates an awesome standard for the Hindu customers through which they are cheated frequently. It is proved in many times that Muslims engaged in hotel/restaurants/food mart business take a chance of ‘beef adulteration’ in any non-beef food items, as it can be possible in secret.

In recent one Jai Khanna of Kolkata cheated enough by Zomato food delivery chain with the connivance with one Arafat Restaurant in a ‘Halal’ and false ‘No Beef’ truce.

As per facebook posting of Jai Khanna+, he ordered online 1 plate Chicken Stew and 2 Parathas through Zomato Kolkata from one Arafat Restaurant. But, Zomato supplied him a beef stew instead.

In his facebook Jai wrote, “A very serious issue has happened in my place today. I had ordered 1 plate of chicken stew and 2 parathas in Zomato (Arafat Restaurant) however I have received 1 plate Beef stew and 2 parathas. I realized only after I took a bite and saw the bones which are big enough to not belong to a goat.

“This is a serious matter as neither me nor my family members consume beef.

“I complained to the Zomato authorities and all they did was express how sorry they are and offered me a refund with Rs 75 discount coupon on my next order.

“I have taken pictures of the food and it is still with me.Will be launching a compliant in the local PS tomorrow.

“You can’t play with people’s belief in this way”.

Though the facebook posting in Jai’s FB wall is not available+ at present, many of people shared it in various social media platform expressing their wrath and criticism against Zomato’s irresponsible and objectionable approach and behavior in this issue.

The habitual offender Zomato showed a ‘take it easy’ attitude and fixed the Hindu faith and sentiment at the cost of Rs 75 discount anyway.

The Hindus in various social media platform are now ready to teach a good lesson to Zomato by boycotting them and to train up the Zomato delivery boys to maintain their duties for not hurting Hindu sentiments anyway, unless Zomato and Zomato Kolkata publicly conveys their apology in public.

This is not the first time, in March, 2019, the Halal propagator Zomato wanted to supply non-veg items even in the Hindu’s sacred City of Haridwar breaking the municipal law enforced there+. But, under heavy Hindu retaliation and strict notice from Municipal authority, both Zomato and Swiggy apologized and restrained to deliver non-Veg items in the Holy city of Haridwar.

4 comments on “Delivery of beef stew instead of chicken in Kolkata. Hindus ready to boycott Zomato in fury. ”