Canadian Hindus in Calgary striving for a river location for last rites rituals.

Hindus push for designated space to scatter ashes along Bow River in Calgary.

Religious group looking for support from city on location for last rites ritual….

Rashesh Bhagat with the Bhartiya Multicultural Heritage Society says Hindus are asking for a quiet, safe place alongside the Bow River to perform the last rites ritual of scattering ashes into a river. (Dan McGarvey/CBC)

Dan McGarvey | CBC News Online | Calgary | April 9, 2022:: Members of Alberta’s Hindu community are asking the City of Calgary to provide a designated spot along the banks of the Bow River to scatter the ashes of loved ones, in line with their faith.

It’s traditional in Hinduism and other religions, including Sikhism, for ashes to be placed into flowing water after a cremation. Similar riverside spaces for the ritual have been provided around the world in cities that have large Hindu communities.

Some Alberta-based Hindu families fly cremated remains to India, where they are scattered in the Ganges River. But many can’t afford to make the trip and would prefer to access a body of water closer to home in Calgary.

“It’s not just religious, it’s much more than that,” said Rashesh Bhagat, founder of the Bhartiya Multicultural Heritage Society.

“It’s very necessary to float the ashes into the water or into the ocean. But in Calgary we don’t have an ocean, so that’s why we want to have permission to do this in the river,” said Bhagat, who estimates there are around 35,000 Hindus living in Calgary.

Bhagat says safety is another big issue with the risk of people falling into water as they scatter ashes alongside riverbanks if there is no safe access point.

“We are requesting our city management team to provide a designated place. And it’s not only Hindus, it’s Sikhs, Buddhists and Jains,” said Bhagat. “They all believe in the same ritual.”

“Calgary is a great place to live, so let’s prove that by honouring the faith and spirituality of Hinduism,” he said. “People will feel their voice has been heard and that they are respected.” 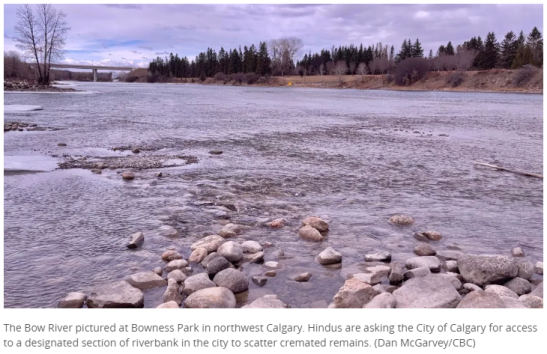 Bhagat says he has contacted MPs, MLAs and city councillors, but nobody wants to take responsibility. He’s also started a petition to bring his request to the attention of decision makers and demonstrate support in the community.

In an email to CBC News, the City of Calgary said it doesn’t encourage the scattering of ashes in the Bow River due to it being a source of the city’s drinking water.

The provincial government says there are no laws prohibiting the practice and it does happen, adding that the river itself falls under federal jurisdiction.

“What they’re asking for is possible, and we’ve spoken with the Hindu community in the past,” said Travis Ripley, executive director of the fish and wildlife stewardship branch of Alberta Environment and Parks.

“This is not an activity we prohibit, although we do request cremated remains are not made near drinking water intakes,” said Ripley.

“These types of activities within the city might also require certain provisions to access the land in and around the Bow River, so that might be where the City of Calgary may play a role,” said Ripley.

Bhagat says he is now looking to connect with city councillors and the mayor’s office in Calgary to get a definitive answer and advance the issue at the municipal level.

About the author: Dan McGarvey is a mobile journalist (MOJO) focused on filing stories remotely for CBC Calgary’s web, radio, TV and social media platforms, using only an iPhone and mobile tech. Dan is focused on the city’s diverse northeast quadrant and sharing stories from under-reported communities. You can email story ideas and tips to Dan at: dan.mcgarvey@cbc.ca or tweet him @DanMcGarvey.

One comment on “Canadian Hindus in Calgary striving for a river location for last rites rituals.”