Calcutta High Court handed over the ‘Kaliachak forced conversion case’ to the CBI and NIA.

Allegations of forced conversion from Hinduism to Islam in Malda under the pressure of a Police IC. The Calcutta High Court handed over the probe to the CBI  and NIA. Lawyers are referring it as a historic verdict. 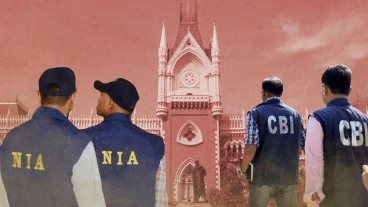 Shyamaprasad Das | HENB | Kolkata | May 19, 2022:: Two brothers of the same family and his wife and children were allegedly forcibly converted to Islam from Hinduism in a village in Kaliachak, Malda. It is alleged that the IC of Kaliachak police station and two policemen were involved in the incident.

Today, Justice Rajasekhara Mantha of Calcutta High Court heard such allegations and handed over the investigation directly to the two central agencies CBI (Central Bureau of Investigation) and NIA (National Investigation Agency) . At the same time, the district police superintendent has been directed to inform what action has been taken with the affidavit. The next hearing is fixed on June 21. For the first time in the history of the High Court, the court issued such an order.

Anindya Sundar Das, a lawyer for the complainant’s family, alleged that the police had filed a complaint against a woman of the complainant’s family for abducting her husband in order to press for conversion. However, two days before the incident, the woman went to the police station to lodge a complaint as she could not find her missing husband. But the police did not take any action. According to the accused woman, the IC of the police station was the first to talk about conversion. He did this with pressure. The two brothers were allegedly detained by members of the Muslim community at a mosque in a local village. Two police officers and a civic volunteer were involved in this. lawyers involved in this case described it as a historic order by Calcutta High Court.

The judge was surprised to hear such incident. He raised the question of how the police could deal with the pressure of conversion. It may be mentioned that a few days ago, WB state BJP president Sukant Majumder+ and others had posted on social media alleging the current conversion row.

The matter came to light when the matter went viral in social media+ that the some of the members of the victim family started a sit in protest in a road side of Kaliachak with placards and festoons describing their ordeal.

Immediately the matter of alleged ‘forced conversion’ in Kaliachak created  huge repercussion in the social media and political sphere.

__Inputs from ABP and Agencies.

One comment on “Calcutta High Court handed over the ‘Kaliachak forced conversion case’ to the CBI and NIA.”