In a selective Hindutva Politics… 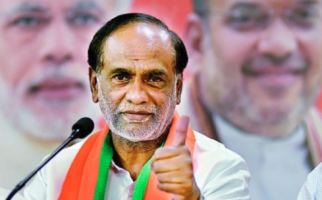 Speaking to ANI, the BJP MP said, “MK Stalin, who is accusing BJP in the name of religion, is absolutely wrong. Stalin who always opposes Hindutva should understand that religion is man’s belief and faith and Prime Minister Narendra Modi has never linked religion with politics.”

Laxman said that all religions are getting the benefit from welfare schemes of Modi in which the maximum benefit is being given to the people of the Muslim community.

“Whatever public welfare scheme PM Modi has made since 2014 till now, Stalin should tell whether there has been any discrimination. The houses are being built for poor people and free rations are being distributed for more than two years, the people of all religions are getting the benefit of these welfare schemes in which the maximum benefit is being given to the Muslim community.”

Actually, the Hindutva politics of BJP is sometime obscure and it differs state to state with its election policy.

The BJP MP from Telangana K. Laxman further slammed Stalin for doing religion-based politics and said that it has become a habit of people to criticise the BJP.

“People like Stalin are speaking against Hindutva, they do caste- and religion-based politics, you people do politics. A regional party and political family is your identity. It has become a habit of these people to criticise BJP,” he said.

The Rajya Sabha MP said that BJP has never done politics based on religion.

“We do not divide people by using religion as a tool. We have never done this; we maintain the faith of people. BJP has never done politics based on religion, you people have done it. You speak against Lord Ram, you speak against Hindutva, these sudo secularists work for the benefit of their families,” he added.

Stalin on Saturday accused BJP of playing the religion card to serve its purpose and said that those dividing people in the name of religion cannot be true spiritualists.

While addressing a gathering in the temple town of Tiruvannamalai, he also said that religion cannot be a tool to divide people.

Stalin had said that he does not believe in any religion adding that he is not against any religion but he opposed those dividing people based on religion.

Side by side, to keep its secular image intact, BJP already removed Haryana IT cell chief Arun Yadav after his old tweet on Islam went viral.

After Nupur Sharma and Naveen Kumar Jindal, Arun Yadav is the third Hindu victim under the scanner of Hindutva Politics of BJP on ‘Remarks on Islam’ row. BJP has become the defender of Islam to lure on its imagery ‘Muslim vote bank’ !

BJP is trying to set its two legs on two boats in the river of Indian politics at a time, one upon ‘selective Hindutva’ and second upon ‘Muslim appeasement’. This is a dangerous mode in a tough voyage.