The end of illegal occupancy of Wakf Board, Independence Day will be celebrated on Aug 15 at Bengaluru Idgah Maidan. 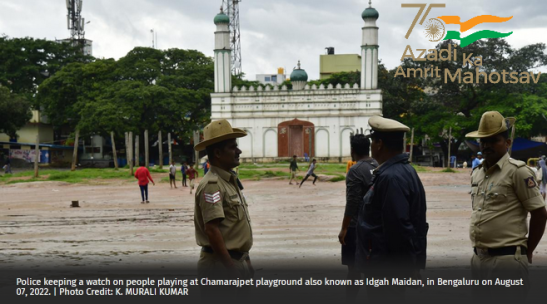 After the end of illegal encroachment of Wakf Board, 75th Independence Day will be celebrated on August 15 at Bengaluru Idgah Maidan, as the land entitled to Karnataka Revenue Department.

Staff Reporter | The Hindu | Bengaluru | Aug 7, 2022:: A day after the Bruhat Bengaluru Mahanagara Palike (BBMP) stated that the ownership of the Idgah Maidan in Chamarajpet is with Karnataka Revenue Department, various Hindu organisations on Sunday gathered near the maidan to celebrate the order.

The groups gathered near the ground and burst crackers, distributed sweets and announced that they will celebrate Independence Day on August 15 on the ground. S. Bhaskaran, president, Vishwa Sanathana Parishath, said, “This is a big victory for the residents of Chamarajpet. We will host the national flag on August 15 at the ground.”

Chamarajpet Nagareekara Okkuta Vedike member Lahari Velu, said, “After the BBMP order, it is like a festival today for all the residents of Chamarajpet. We were all fighting for the ground for the last decade.”

On Saturday, the city’s civic body dismissed the petition filed by the Karnataka State Board of Auqaf for a khata in its favour for Idgah Maidan at Chamarajpet (Survey number 40, Guttahalli village, 2 acres 5 guntas), and declared Karnataka Revenue Department to be the default owner of the land.

City survey records had recorded the land as a playground of the civic body, a claim that has also been given up now, with the civic body deciding to record ‘Karnataka Revenue Department’ as owner in its records. S.M. Srinivas, Joint Commissioner (West), BBMP, who presided over the proceedings, issued the order.

The decades-old dispute over Idgah Maidan was reignited in May-June, 2022, when a few Hindutva organisations sought permission of the civic body to hold events at the maidan. This brought out two contrary sets of documents – Karnataka State Board of Auqaf presenting a 1965 gazette notifying the land as Wakf property, and 1974 City Survey records and all civic records thereafter showing the land to be a civic playground.

2 comments on “The end of illegal occupancy of Wakf Board, Independence Day will be celebrated on Aug 15 at Bengaluru Idgah Maidan.”