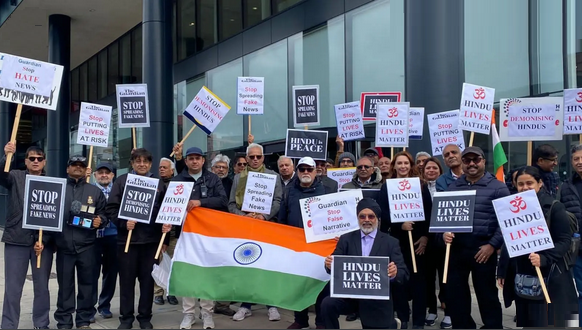 In an Op-ed titled ‘What is Hindu nationalism and how does it relate to trouble in Leicester?’, The Guardian associated Hindutva with “right-wing extremism”

Arghya Mitra | HENB | London | Sept 28, 2022:: Several Hindus of Indian roots in the UK gathered on Wednesday in front of the Guardian News office in London to protest against the media house’s “misleading and biased coverage” of the Leicester violence. The protestors claimed that the Guardian has projected the Hindu community in a bad light.

In an Op-ed titled ‘What is Hindu nationalism and how does it relate to trouble in Leicester?‘ in recent, The Guardian associated Hindutva with “right-wing extremism”. The report also blamed Hindus for instigating communal violence in Leicester. In a continuous anti-Hindu methodology, the Guardian has been trying to defame Hindus by publishing various articles like, “How Hindu supremacists are tearing India apart.“

A press release issued on Tuesday said, “As a result of Hindu hate-filled articles in The Guardian, a vigil will take place outside their premises” at Kings Place, London. The “misleading coverage” in The Guardian causing the protest of the Hindus is credited to journalists Jessica Murray, Aina J Khan, and Rajeev Syal.

They also handed over a memorandum to the Chief of Security of the Guardian. It was addressed to the editor of the media house, Katharine Viner and the protestors have sought response to it.

Former BBC journalist Shiv Kant told India Narrative in an exclusive video interview earlier this week that radicalisation among the Muslims has been on the rise in the UK for a while now.

The British mainstream media, including The Guardian and the BBC, found themselves caught in a web of misreporting by their reporters and writers-eventually setting an agenda in favour of radical Muslims. Many of the untruths reported by the UK’s widely respected media houses only helped in furthering animosity towards the Hindus. The BBC made a half-baked effort to say that it peddled misinformation.

With strict police action and investigations in Leicester and Birmingham, London was spared the fire and fury of Muslim mobs attacking temples. The police in Leicester is, meanwhile, untangling the web of Muslim outsiders called in from other parts of the UK to fan violence in an otherwise peaceful city.

The investigations have swung to critically look at the role of Majid Freeman, a Leicester-based Islamist who fired the initial salvos of fake news about Muslims under attack, creating Hinduphobia and leading to hate attacks.

The members Indian diaspora in UK have tried to ventilate their protest against the fake narration of Hindutva as franchised by some media houses in India like NDTV, The Wire, The Quint, Scroll etc. and New York Times, The Guardian and Al Jazeera etc. outside India.

India also saw the protests before the UK Embassy in Delhi four days ago against the perpetrated ‘Hindu Hate’ unleashed in Leicester and Birmingham  by the Jihadi elements living in UK.