Communal Tension After Vijaya Dashami at Mominpur-Ekbalpur area in Kolkata. Mamata Banerjee is unconcerned. Media is Silent. Hindus are fleeing under Islamic attacks! What is happening there?

Sumita Saha | HENB | Kolkata | Oct 9, 2022:: BJP State President, Dr Sukanta Majumdar tweeted some pics and videos mentioning the unwarranted clash between Hindus and Muslims. It is reported from an unverified source that the delay in removing Durga Puja Pandal near Nav Yuvak Sangha (Yuva Shakti Committee) Club created a ruckus. In that row local Muslims attacked the Hindu residents of Maila Depot- Mominpur. It is also said that Muslim miscreants barged into Hindu houses, vandalized those and molested Hindu women. Many motorbikes were also damaged/ vandalized, as reports flashed in the social media. All these happened on Saturday night after 2 pm as said. Tension continued  the next day.

Most probably Youtube authority has blocked the above video on legal complaint given by Govt of West Bengal. Upananda Brahmachari, the Editor of http://www.hinduexistence.org uploaded the video in youtube and he wanted to know from the authority who had lodged complaint against the video, as reports came in. 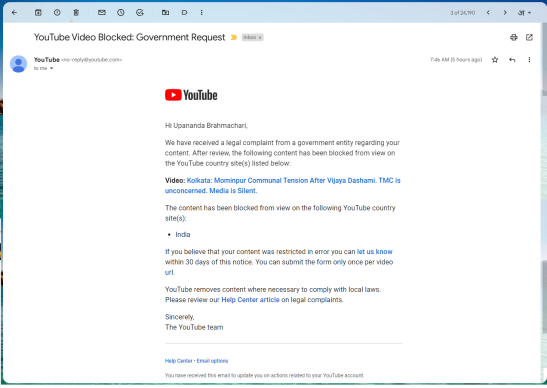 Hence, the same video footage again uploaded as below:

** SEEN THAT THE YOUTUBE HAS BLOCKED THE VIDEO PERMANENTLY EVEN AFTER REQUEST TO UNBLOCK IT. (Updated on 23.10.2022) 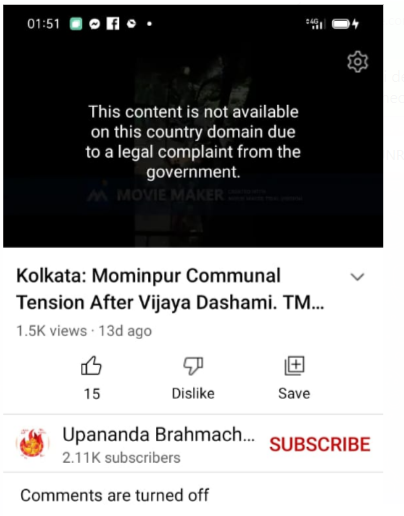 Some says the ruckus broke out due to a route dispute for a Valmiki Jayanti procession.

Another source says, rucks began when some Muslim youth started mounting green (Islamic) flags in the Hindu areas for observing Navi Diwas under the leadership of one Myzabin Bibi of Hossain Saheb park area. As the police on duty took that Muslim lady to the local police station for interrogation, the Muslim mob started rampage and damaged 10 four wheeler and  25 Motorbikes. 15 Hindu houses were also attacked and looted, the same source said.

In the available video, it is seen that RAF has been posted there near the Nava Yuvak Sangha. The area is still tense.

It is natural that the ruling TMC is  trying to ignore the matter, BJP will blame the WB Govt for raising the law and order situation, but why the Bengal media is silent throwing out all the responsibilities from its shoulders.

WB CM Mamata Banerjee (who is also the Police Minister of the state) must look into the matter to keep it calm over the situation before it goes beyond control.

Hindus cannot be just the target of the Jihadi elements so far in West Bengal for any political indulgence.

In a series of tweets, BJP WB President urged to the authorities to maintain safety and security of Hindus, “In Mayurbhanj (Road), Kolkata Port, Hindus are fleeing, their houses are being attacked. Police is silently watching. There is no law and order. The situation is serious but CM ⁦@MamataOfficial is watching Hindus suffer.”

In another tweet he wrote, “Disturbed to know present situation of Mominpore-Khidirpore area. @mamataofficial must take strong action and ensure safety of Hindu families who are under attack since yesterday. When DGP West Bengal and Cp Kolkata will come out from slumber.“

Details of the incident are still awaited. It is also said that two Deputy commissioners of Police and one Joint Commissioner of Police are also stained at the disturbed areas.

One comment on “Communal Tension in Mominpur. Why WB CM & Bengal Media are silent?”