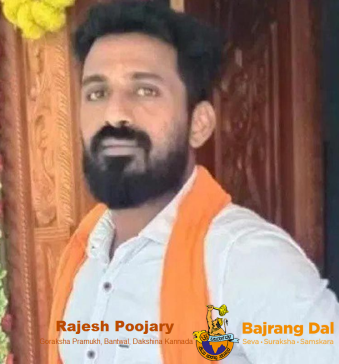 B Upendran | HENB | Mangaluru | Jan 13, 2023:: A body of a 38-year-old man was found in the Netravathi river at Panemangaluru in Dakshina Kannada, police said on Thursday.

The deceased is identified as Rajesh Poojary, a resident of Sajipa in the district.

According to the officials and family sources, the deceased is a Goraksha Pramukh of the Bajrang Dal local unit and a centering worker for building constructions.

Immediately locals informed the Bantwal Town police after a two-wheeler was also found abandoned on the bridge of Panemangaluru in the morning.

As per police, prima facie, it is suspected that Rajesh Poojary was riding his two-wheeler in Sajipa when a vehicle collided with his two-wheeler leading him to fall into the Netravati river.

Police’s investigation into this matter is underway. The body of the deceased  has been sent for post-mortem.

But, the friends and relatives of the Hindutva activists have alleged that the death is not a matter of mere accident and that may be linked with the serial killing of Hindutva activists in Dakshina Kannada and the state of Karnataka by Jihadi perpetrators since a long time.

Another Rajesh Poojari, also a Hindutva activist and auto rickshaw driver was hacked to death on March 21, 2014 at Kalpane in Bantwal Taluk in Dakshin Kannad (Karnataka). A Court acquitted three Muslim accused (Irshad, 21, Imran, 20 and Hussain, 20, residents of Mullur village) in Bajrang Dal activist Rajesh Poojary murder case three years later in 2018 after their arrest, for the failure of the prosecution to prove the charge made against the accused. But, Poojari’s wife HS Pallavi did mention the names of P Musthafa, Ajeez, Ajeez, residents of Addoor, and another unidentified person  as accused/ suspected, and their names have been recorded in the FIR. However Police could not arrest the prime accused and still the case is unresolved.

It is a matter of fact,  the murder of BJP Yuva Morcha member Praveen Kumar Nettaru who was hacked to death by a gang of Islamist miscreants on July 26 night last year in the region created a major fissure in the Hindu-Muslim relationship disturbing the communal harmony. The probe showed that Nettaru was targeted in the backdrop of the hijab controversy.

Now, the suspicious death of Hindu activist Rajesh Poojary, a resident of Sajipa near Panemangalore- Bantwal town in Dakshina Kannada district as his body recovered on Thursday, has created tension in the area. From many bitter experiences, Hindus of the area think it just another case of Jihadi attack on a Hindutva worker and his murder under Islamic conspiracy.

The postmortem report is waited and probe is on.

Vishva Hindu Parishad (VHP) Karnataka Co- Convenor Sharan Pumpwell has demanded a high-level probe into the incident. However, Karnataka is a BJP ruled state and the next assembly election of the state will be held before May 2023, as normal schedule.

__Inputs from ANI and Jagran.