Through Ganga Aarti, we want to revive the culture of Bengal giving due reverence to River Ganga: Mahamandaleshwar Swami Paramatmananda Ji. 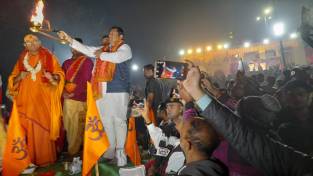 Upendra Bharti | HENB | Kolkata | Jan 15, 2023:: There was a ruckus with Ganga Aarti performed at Babughat while BJP WB State President Sukant Majumjudar performed the Ganga Aarti by keeping the police in a frenzy. Today Ganga Aarti was organized in Bhatpara of Barrackpore in a big stage at Balaram Sarkar Ghat there as organized by Hindu Jagaran Manch. Going there, Sukant Majumjudar accused the state government of obstructing Hindus from practicing their religion. He raised the question, if a Muslim does not need permission to offer Namaj on the street, why does a Hindu need permission for Ganga Aarti?

While speaking about the incident of Ganga Aarti at Babughat in Kolkata, he said that the Ganga Aarti was organized on the initiative of the Bengal BJP on January 11 before the Gangasagar Mela, but the police did not give permission. The police started dismanteling the stage that day.

A huge gathering was seen at the Bhatpara Ganga Aarti where Mahamandaleshwar Swami Paramatmanandaji of Maha Nirvani Akhada blessed the devotees and said, “Through Ganga Aarti, we want to revive the culture of Bengal giving due reverence to River Ganga. Such spiritual and religious gathering of the followers of Sanatan Dharma will maintain the Hindu Culture of Bengal in any circumstances.”

Speaking today, Sukanta Majumdar said, “Hindus are fighting to protect their culture continuously.  A result of that struggle is the construction of the Ram temple in Ayodhya today”.

He claims that the part of India from which the Ganga Mata -Go Mata and Gita Mata are removed,  has been separated from India. Those parts are no longer considered to be India.

Speaking today Dr Majumdar compared the police administration and the Trinamool leader and workers to the demons of Ramayana. He said, it was seen in the Ramayana that when sages and sages used to perform Yajna, a group of demons would attack to vandalize it. And now, that demons now come in a khaki or white dress. They are sent to stop the Ganga Aarti of the Hindus.

He also claims that it is not possible to save this Bengal unless Hindu culture and traditions are awakened in Bengal once again.

Mahamandaleshwar Swami Paramatmanandaji aspired that the Bengal will rise again in harmony and prosperity with the unity of all people avoiding political and sectarian differences which are too much harmful for the society in the long run.