Synergic Celebration of the 150th Birth Anniversary of the Cyclonic Hindu Monk of Bharat (India). 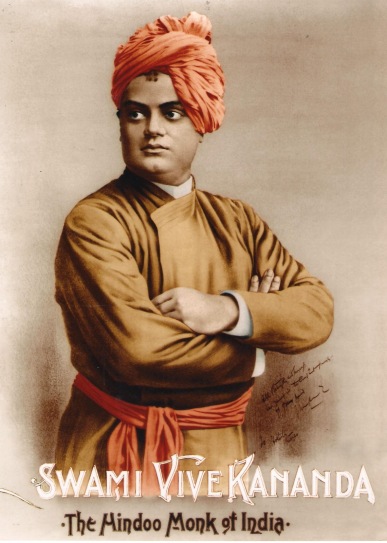 The celebrations started early in the morning at his ancestral house in the city’s Shimla Street, where people from all walks of life assembled to pay homage. A colourful procession, taken out mostly by school children, wound its way through the city’s streets.

At the Belur Math – the headquarters of the Ramakrishna Math and Ramakrishna Mission, founded by Swami Vivekananda – the day was celebrated as Youth Day.

Kozhikode | January 12, 2013 | The Hindu ::  The 150th birth anniversary celebrations of Swami Vivekananda that will begin on Saturday will be marked by a Mahashobhayatra and around 20 Shobhayatras in Kozhikode district.

Chairman of the celebration committee Prabhakaran Paleri will inaugurate the Mahashobhayatra in Kozhikode city at 4 p.m. on Saturday on the Sreekanteshwara temple premises. Shobhayatras that begin from Arayidathupalam, Nadakkavu, and Thiruvani temple and Tali temple will converge with the Mahashobhayatra at various points in the city and will conclude on the Muthalakkulam ground by 6 p.m.

Head of Adwaithashram in Kolathur Swami Chidanandapuri will speak on the occasion. Children dressed as Swami Vivekananda and tableaux on various incidents from his life will be part of the Mahashobhayatra.

Describing Vivekananda as a visionary, Choudhury urged the youth to follow Swamiji’s call to discipline their lives for the development of the country.

“We need engineers, doctors scientists, teachers who do not work only for themselves but for the eradication of poverty and hunger and welfare of the country following Vivekananda’s ideals,” the educationist said.

Attending the year-long programme organised here to mark the 150th birth anniversary of Swami Vivekananda, Choudhury said his ideals were relevant considering the prevailing situation in the country.

Vaishnavite monastry Barpeta Sattra’s head Bashishtha Dev Sarma emphaised the need for value based society which could change the future of the nation.

ANI |  New Delhi | Sat Jan 12 2013 ::  To commemorate the 150th birth anniversary of Swami Vivekananda on Saturday, a number of functions are being held across the country.

President Pranab Mukherjee will inaugurate the anniversary celebrations at Rashtrapati Bhawan in New Delhi and release a set of commemorative coins and stamps.

UPA chairperson Sonia Gandhi along with several Union Ministers will be present on the occasion.

A National Committee under the Chairmanship of Prime Minister Manmohan Singh was constituted to consider policies, lay down guidelines for the anniversary commemoration and decide on the time frame for related activities.

Swami Vivekananda born as Narendra Nath Datta was a key figure in the introduction of Indian philosophies of Vedanta and Yoga to the western world.

He was also credited with raising interfaith awareness, bringing Hinduism to the status of a major world religion in the late 19th century.

Bangalore | January 12, 2013 | Samvad Org :: The man who ever remembered as an icon of youth, wisdom, nationalism  universality and brotherhood, Swami Vivekananda, was remembered today across the nation and worldwide through various programmes.

By J.V. Lakshmana Rao | Chicago India Tribune :: Outside India, Chicago occupies an important place in the life and work of Swami Vivekananda, the great Hindu monk. It was here that he got international recognition for himself, for India’s Vedanta and Vedic spirituality and for Hinduism with his maiden powerful “Sisters and Brothers of America” speech at the World’s Parliament of Religions on that historic day – September 11, 1893.

Swami Vivekananda and the making of modern India.

By Amiya Prosad Sen | Jan 12, 2013 | TOI :: In several ways, the life and work of Swami Vivekananda (1863-1902) mark the historical process of India rediscovering herself in modern times. These are also emblematic of the ways in which a tradition modernizes or creates alternative forms of modernity. Today, as the nation celebrates the 150th birth anniversary of the Swami, it is only apt that we critically reflect on his life and legacy.

Generally speaking, his contribution to India and to the larger world may be summed up in four ways. First, in modern India, it was Vivekananda who first emphasized that our everyday lives would become more meaningful only when spiritualized. It was in this spirituality that he re-discovered, as it were, India’s message to herself and to the world. For Vivekananda, this spiritual self-realization led to people more fully realizing their own potentialities. Especially in the context of a colonized society like that of 19th century India, this was tantamount to men and women locating greater self-belief in themselves.

The human soul being free, suggested Vivekananda, more than compensated for the loss of political freedom.

Second, even though the Swami rejected political praxis and West inspired social and religious reforms, his essential message was the empowerment of the people: through education, collective thought and action but above all, realizing he underlying unity of all human existence. In the Hindu tradition, ascetic detachment from the world had been criticized even before Vivekananda but it was he who first actively joined the idea of individual renunciation to committed social service. >>Read details here.

One comment on “Synergic Celebration of the 150th Birth Anniversary of the Cyclonic Hindu Monk of Bharat (India).”