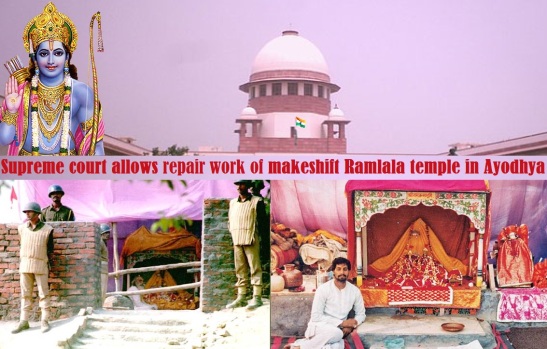 HENB | New Delhi  | Aug 10, 2015:: In an unprecedented move and a major relief for pilgrims, the Supreme Court on Monday allowed repairing of covers and providing other facilities at makeshift Ramlala Temple at the disputed site in Ayodhya, which once hosted the disputed and illegal Babri structure. The apex court said that the repairs should be undertaken by the District Collector of Faizabad under the supervision of two independent observers.

“The exercise has to be undertaken by District Collector of Faizabad under the supervision of two independent observers,” the court stated.

On Friday last, the Supreme Court had asked the central and Uttar Pradesh governments to make available whatever facilities that could be extended to pilgrims going to Ayodhya to offer prayers at the makeshift temple on the site where the disputed Babri structure once stood. It was demolished during a rally on December 6, 1992 by Hindu activists, who claim the site is the birthplace of Lord Ram and forcefully shape as a mosque by the commander (then Governor of Awadh) of Babar named Mir Baqi Tashqandi in 1528.

The orders came months after the apex court in March had asked the Centre to consider the facilities feasible in the present scenario that could be provided to pilgrims at ‘Ram Janam Bhoomi’ site near the disputed structure at Ayodhya.

The BJP leader submitted that pilgrims, who are devotees of Lord Rama, are deprived of even basic facilities like drinking water and toilets and face difficulty due to inadequate arrangement made by both the Centre and Uttar Pradesh government.

Swamy had said the status quo order passed by the apex court in 1996 was limited to prohibiting building of any structure at the disputed site.

In his application, he had sought an order from the apex court to “ameliorate the lot of millions of Hindu pilgrims who make the pilgrimage to the site of the ‘Ram Janam Bhoomi’ at Ayodhya, to have a ‘darshan’ and perform ‘pooja’ in honour of ‘Sri Ram Lalla Virajman’.”

In response, Uttar Pradesh Advocate General VB Singh said: “We have seen everything. No one pilgrim is aggrieved. Only the petitioner (BJP leader Subramanian Swamy) is aggrieved.” Swamy told the court that he was seeking the upkeep of the place and some facilities for the pilgrims. He also informed the court that he was asked by it to prepare a list of facilities that are needed by the pilgrims going to Ayodhya.

Senior BJP leader and Hindu think tank, Dr. Subramanian Swamy has been struggling for the construction of Sri Ramjanmabhoomi Temple at the earliest and he has written to PM Modi and the BJP President several times on this matter.

____With the input from PTI. Courtesy to the link used above.