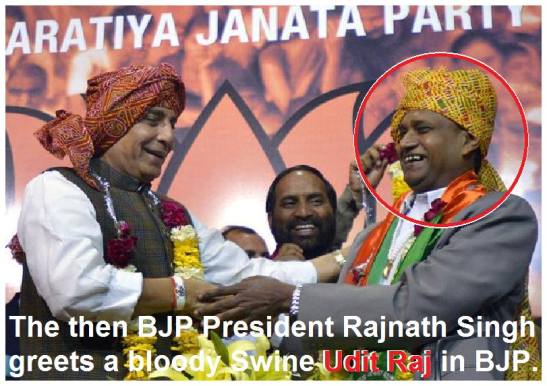 Why this Beef-Propagator  and Bastard Dr. Udit Raj is still now in BJP?

Upendra Bharti | HENB | New Delhi | Aug 29, 2016:: BJP MP from Delhi, BJP National Executive Member and anti Hindu and Pro-Muslim, Pro-Christian Dalit leader Dr Udit Raj raised many eyebrows on Monday with a tweet which suggested that champion Jamaican athlete Usain Bolt went on to win nine Olympics gold despite being born in poverty after his trainer advised him to eat beef twice a day. However, Udit Raj could not produce any reference of the actualities on the trainer’s advice as such to bolt.

“Usain Bolt of Jamaica was poor and trainer advised him to eat beef both the times and he scored 9 gold medals in Olympics,” the Lok Sabha member from North West Delhi tweeted.

Beef is an emotive issue for the BJP whose governments in various states have come out with tough laws banning its trade.

Udit Raj, however, tried to play down any controversy saying that he merely repeated what Bolt’s trainer had said and all he meant was that the athletes can find a way to excel despite adversities and they should not blame circumstances for their failures.

Before joining BJP, Udit Raj was a champion of Dalit-Christian-Muslim unity to destroy the Hindu unity as such or to weaken the strength of Hindu society on the basis op untra Dalit politics. Udit Raj has a record with BAMCEF in his early days career before he established a pro-christian and pro-Muslim Indian Justice Party on 2003 with the help of All India Christian Council and Jamiat-e-Ulema Hind. His close connection  anti-Hindu evangelist John Dayal and Maulana Mahmood Madani had triggered controversies many times earlier even among the Dalit communities itself. 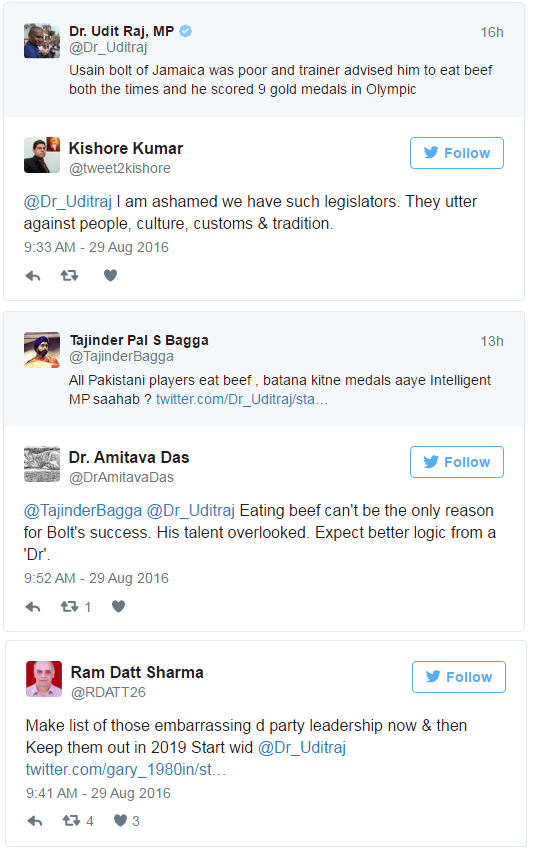 Judging a sharp reaction on his tweet propagating “beef-eating”, Udit Raj tried to clarify his position, but he had nothing to say on a tweet that smashed his position by questioning, “All Pakistani players eat beef , batana kitne medals aaye Intelligent MP saahab ?“… All Pakistani players eat beef, tell us intelligent Mr MP, how many medals they won.

Frustrated with the anti-Hindu activism in BJP, one tweeted, “I am ashamed we have such legislators. They utter against people, culture, customs & tradition”.

Annoyed with the “Beef Tweet” of Udit Raj, one suggested to BJP, “Make list of those embarrassing d party leadership now & then Keep them out in 2019 Start wid Dr Udit Raj”.

But, some critics mentioned that Udit Raj might be inspired by PM Modi himself with his great “cow vigilantes remarks”!

One comment on “Kick out Anti-Hindu & Beef-Propagator Dr Udit Raj from BJP immediately.”