Upendra Bharti | HENB | Lucknow | Oct 15, 2016:: Condemning the All India Muslim Personal law Board’s (AIMPLB) stand for using sharia to perpetuate patriarchy, many Muslim Women activists and Organisations have now started their campaign for Uniform Civil Code in India. Most of them speak out for a rigorous revisions of the part of Muslim Personal Laws which contain the ‘worst dictum of Triple Talaq and polygamy for Muslim women’.

The decision of AIMPLB  to boycott the Law Commission’s questionnaire on triple talaq and polygamy drew sharp reactions from Muslim women across the country, with some activists vehemently speaking out against the discriminatory laws in the Shariat. 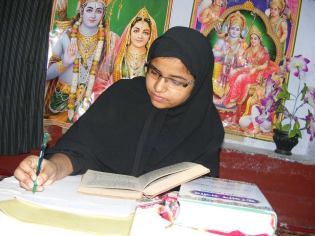 The eminent social activist and champion of Hindu-Muslim unity, Nazneen Ansari in Lucknow condemned the AIMPLB for twisting Shariat laws to their advantage of gender bias and communal divide. “Why should the Shariat be taken into account only when there’s a debate on the freedom of Muslim women?” asked Nazneen. “Why don’t these clerics press for Shariat laws against Muslim men accused of rape and other such crimes in India?” Nazneen told HENB. A President of India Awardee Nazneen Ansari is the president Muslim Mahila Foundation and also the national executive member of Rashtriya Muslim Manch. An ardent advocate of ‘Hindu-Muslim unity’, ‘Ganga Jamuna Tehzeeb’  and ‘One Nation – One Law’,  Nazneen Ansari translated Hanuman Chalisa and Ram Charit Manas in Urdu.

It is reported that the  Muslim Mahila (Women) Foundation and Rashtriya Muslim Manch are going to lead a nationwide campaign for the rights of Muslim women and for enacting an Uniform Civil Code of India.

These organisations have urged the concerned citizen of India to protect the Muslim women’s rights through sending suggestions to the Law Commission of India in their link http://lawcommissionofindia.nic.in/questionnaire.pdf  (download questionnaire here) within 21st Nov 2016 to the Office of Law Commission of India, 14th Floor, H.T. House, Kasturba Gandhi Marg, New Delhi- 110001 or  email at lci-dla@nic.in .

As, Govt of India wants to assure a Uniform Civil Code in India apropos of Article 44 of Indian Constitution, all the law abiding citizens and inhuman Sharia-aware people must send their suggestions to Law Commission’s opinion seeking drive to curb the Sharia law and to establish a uniform civil code in India.