Challenging UCC as in Art. 44 of Indian Constitution AIMPLB sticks on Shariah and Triple Talaq.

DEMOCRACY GO TO HELL, ONLY SHARIAH WILL PREVAIL.

In Kolkata convention of AIMPLB, it reveals that 2 crores of Hoors (damsels) came down to earth for Shariah signature campaign!! 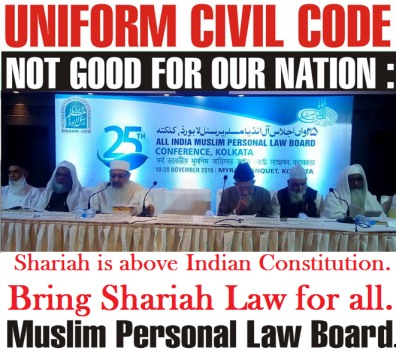 Upendra Bharti | Kolkata | HENB | Nov 19, 2016:: The All India Muslim Personal Law Board (AIMPLB) today decided to oppose tooth and nail the Centre’s move against the triple talaq and the imposition of Uniform Civil Code in the country.

The decision was taken on the second day of the three-day convention of AIMPLB, to discuss issues ranging from triple talaq, Uniform Civil Code (UCC) to other religious matters of the Muslims.

The AIMPLB, which is the highest decision-making body on Muslim personal laws, usually sticks to only the personal laws broadly covering marriage, divorce (talaq), inheritance, succession and adoption-related issues. For opposing the center’s decision to introduces an Uniform Civil Code under Art. 44 of Indian Constitution, AIMPLB is now doing their 25th Convention in Kolkata from 18-20 Nov, 2016 within an warm reception of strong support of AITMC, the ruling party in West Bengal. The convention will end with a mass rally at Park Circus maidan on November 20.

Maulana Rabey Hasani Nadvi re elected as president of All India Muslim Personal Law Board (AIMPLB).

“It has been unanimously decided in the convention that we want triple talaq to stay and we will oppose any move by the government against it. We will also oppose uniform civil code. The triple talaq has been going on for ages and it is part of our religious rights,” TMC MP and chairman of AIMPLB reception committee Sultan Ahmed told PTI.

The AIMPLB has already launched a signature campaign opposing the move and they claimed that more than 10 crore Muslim women from across the country have signed supporting the practice of triple talaq. The issue of alleged harassment of Muslim youths was also taken up during the convention going on Myrah Banquet (Jalan Group) at 164 AJC Bose Road, (Mallikbazar-Beniapukur area) Kolkata – 14.

There are 17.22 crores of Muslim population in India  (14.23%) out of which Muslim female data figures as 83,971,213 as per 2011 census. But, the moron members of AIMPLB spread the news of  unique ‘anti talaq and UCC’ signature campaign by 10 crores of Muslim women. This could only be possible if some 2 crores of Hoors (damsels) came down to earth from Allah’s brothel named Jannat or Behesht to join for the Shariah signature campaign launched by AIMPLB. Marhaba!

“Our President Maulana Rabey Hasani Nadvi, during his speech, has clearly said that the BJP government at the Centre has taken up an agenda of unnecessarily harassing the Muslims of the country especially the young generation. The government has the tendency to implicate the Muslims as anti-nationals and harass them,” a member of the AIMPLB told PTI on condition of anonymity.

He said the BJP is trying to infringe upon the religious rights of Muslims and it will not be tolerated. “Muslims are part of this great secular, democratic republic India. We will fight against this communal designs of the BJP government”.

As a matter of fact a good numbers of Indian Muslim women took to the streets and registered their protest against ‘Triple Talaq’ and ‘gender discrimination’ in Islam. But, such movements of different anti-Talaq organisations did not get any political affiliations. On the contrary, the AIMPLB has captured the anti-UCC movement and pro-Talaq sensations from Muslim men with great help from all political parties except BJP. The pseudo secular political parties in India are fanning the AIMPLB fiery move for Shariah  for a specific reason of ‘Muslim Vote Bank” politics.

From a source, it is intercepted that All India Muslim Personal Law Board (AIMPLB) resolved unanimously that ‘Shariah has its place above any man made constitution of the world and any constitution is not maintainable if clashed with Sariah’. They also held the position of Shariah courts above the Indian judiciary in case of personal law matters of Muslims.

HENB Experts on Islamic affairs say that in such a resolution taken by  AIMPLB throws a big challenge to Indian constitution and its plural and democratic structure. Sticking on Shariah instead of Uniform Civil Code is another Jihad  to ensure Islamisation of India in a very culpable way. Some years ago a UK based Jihadi outfit wanted to introduce a “Shariah for Hind” project in India. In many places of the world and India, the Shariah supporters openly deny the democracy and demand Shariah through their patent slogan, “DEMOCRACY GO TO HELL, ONLY SHARIAH WILL PREVAIL”.

__With input from PTI.

2 comments on “Challenging UCC as in Art. 44 of Indian Constitution AIMPLB sticks on Shariah and Triple Talaq.”