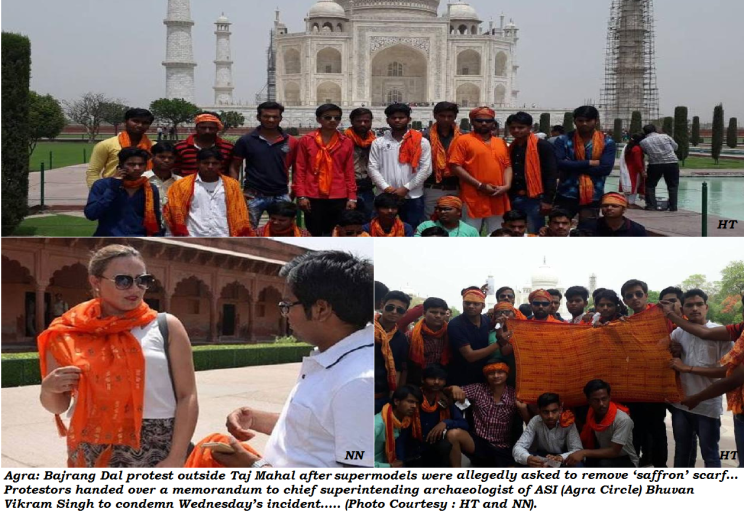 Atul Rwawat | HENB | Agra | April 22, 2017:: The Bajrang Dal and VHP  today staged a protest outside the Taj Mahal over reports alleging that visitors to the mausoleum were not allowed to wear saffron scarves.

The activists were angry at supermodels visiting the Taj being told to deposit their saffron stoles at the monument’s gate on Wednesday.

The protesters reached the barricading of the eastern gate and returned only after the ASI chief received their memorandum.

They demanded action against the personnel who had allegedly asked models visiting the monument to leave their saffron scarves at the gate four days ago, ASI chief in Agra Bhuvan Vikram told.

Archaeological Survey of India (ASI) chief in Agra Bhuvan Vikram told PTI that members of various outfits gathered outside the Taj Mahal’s eastern gate on Saturday afternoon and raised slogans. “I met them and accepted their memorandum demanding action against some staffers. We will look into their demands and take appropriate action, if required, after inquiry.”

The alleged incident has sparked a row with the Centre ordering a probe. Tourism and Culture Minister Mahesh Sharma has asserted that there are no restrictions with regard to clothing for visiting the world famous 17th century monument. The right wing Hindu outfits on Friday announced “maha gherao” of the Taj Mahal.

The protesters told HENB that the ASI authority takes a double standard to allow Hindus, Muslims and even the foreign visitors wearing saffron scarves.

Some protesters alleged that Muslims are allowed to carry thousand meters-long ‘chadar’ on ‘Urs’ of Shah Jahan, ‘beef biryani’ is cooked on Taj premises and drums are played but those wearing saffron are stopped at the gate.

The models who visited the Taj are representing their country in the 11-day Supermodel International Contest which started on April 12. The annual Urs of Mughal emperor Shah Jahan, who built the Taj Mahal, begins on Sunday and will continue till Tuesday.

A thousand-metre-long ceremonial ‘chadar’ would be offered by Khuddaam-e-Roza committee. Tourism outfits are worried that the controversy may affect the flow of visitors.