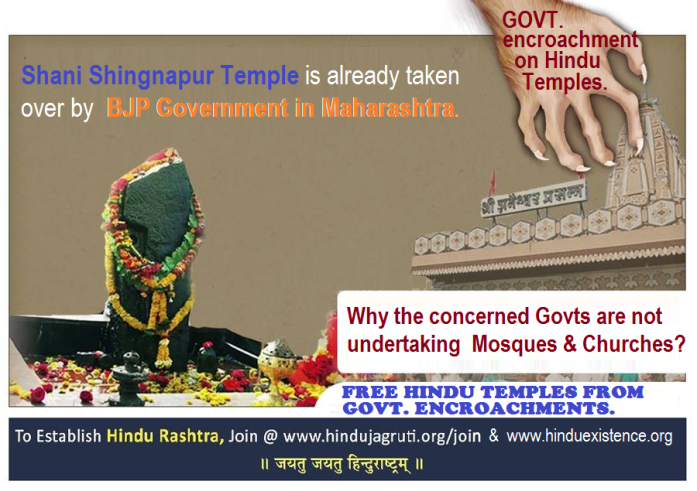 Shani Shingnapur Temple is now taken over by BJP Government in Maharashtra. But, why they are not taking over the Mosques and Churches too?

Upendra Bharti | HENB | Mumbai | June 21, 2018:: While VHP (Viswa Hindu Parishad), a sister concern of RSS (Rashtriya Swyamsevak Sangha), of whom BJP (Bharatiya Janata Party) is the political wing, has been opposing the  issue of ‘taking over of Hindu Temples by the Govts’, the BJP led Govt in Maharashtra is taking over many temples one by one without listening anybody, anyway.

Actually, the Congress Governments in many states as earlier  had emptied the entire public exchequer and then put its eyes on the money donated by devotees to Hindu temples. They started taking over Hindu temples to usurp the money for personal and political interests. They looted crores of rupees offered by devotees to temples and used it for Haj pilgrimage and renovation of churches. Such anti-Hindu activism was also criticized by the BJP many times.

“According to the directives of the Supreme Court, the Secular Government has no right to manage Hindu temples; they should remove the shortcomings in the management of temples and hand them over back to the respective communities. Still, the BJP Government has taken the decision to take over the Shanaishwar Temple in Shingnapur, Maharashtra. Hindu Janajagruti Samiti strongly protests this decision. If the Government fails to withdraw the decision, Samiti would launch a public agitation”, warned Shri. Sunil Ghanvat, Organiser of Hindu Janajagruti Samiti for Maharashtra state.

Mr. Ghanvat further states, “Even earlier, the Government took over Shri Viththal-Rukmini Temple in Pandharpur, Shri Tulajabhavani Temple in Tuljapur, Shri Siddhivinayak Temple in Mumbai and 3,067 Temples by establishing ‘Pashchim Maharashtra Devasthan Samiti’. The last one also includes Shri Mahalakshmi Temple and Shri Jyotiba Temple in Kolhapur. These temples were taken over under the pretext of improving their management. However, in reality, the Government Committees indulged into large scale corruption in temple management and usurped crores of temple money. Investigation by CID and Court cases in this regard are in progress. The Government which failed to punish the persons responsible for looting God’s money has no moral right to take over the Shanaishwar Temple. The Government should first reply as to why no action has been taken against the persons responsible for looting God’s money in the temples taken over by the Government and why these corrupt persons are left scot-free; otherwise, the Government would invite the wrath of not only Deity Shani but also of all Hindus.

Hindus do not donate money to temples for utilising it for Social or Government projects, but for the mission connected to Dharma. These donations must be used only for the mission connected with Dharma. And this mission can be carried out only by real devotees. Therefore, the Government should hand over all temples taken over by it so far to the devotees. Similarly, it should take stringent action against the concerned persons involved in corruption in temples. Failing which Hindu Janajagruti Samiti would launch State-wide agitation by taking to streets, warned Shri. Ghanavat.

As a matter of fact, tendencies of BJP to encroach the Temple Trusts or taking over new temples are very much alarming as these are not the way to commit same sin as done by its Congress counterpart previously.

From source it is now derived that RSS-BJP combine is with a plan to capture all Hindu Temples and Shrine Trusts by deputing their men for utilising the huge Hindu donations aggregating there, for the development of BJP, RSS and its sister concerns.

The trend of corruption and misusing Temple donations or to help the anti-Hindu sectors is a serious concern for Hindus. The Sangha Parivar must not overlook it or shout no allow the inappropriate indulgence.

BJP Govt in Maharashtra and other states must take initiative to free all Hindu Temple and Shrines from Govt control and encroachment.

Upananda Brahmachari, Editor, Hindu Existence Website and prominent Hindu interlocutor urged the Central Govt and concerned Sate Govts to make arrangements to free Hindu Temples without delay and to ensure the utilization of Temple donation only for the purpose of Hindu Empowerment.

__input from the Press note sent by Arvind Pansare, HJS-Mumbai.