Upananda Brahmachari | HENB | Haridwar | Oct 16, 2018:: A derogatory advertisement showing Ma Durga in a silly advt drama as engaged in preparing non veg dishes; and that is also propagating non-vegetarian food during Navratri — which is also Durga Puja in some parts of the country — has hurt the sentiments of a large section of Hindu people.

The advt hurts a million of Hindus who observe Navaratri and Durgapuja. The Hindu Janajagruti Samiti immediately retaliated through its twitter handle as on Oct 10th: 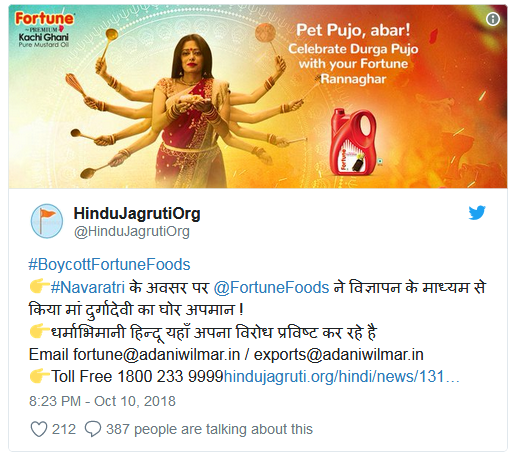 Apprehending the substantial loss in the business in the states where Navratri is usually observed, the edible oil company withdrew the impugned advt, keeping it intact in the domain of West Bengal. The Hindu Janajagruti Samiti  Samiti also conveyed thanks to Fortune Foods on 11 Oct. very astonishingly. 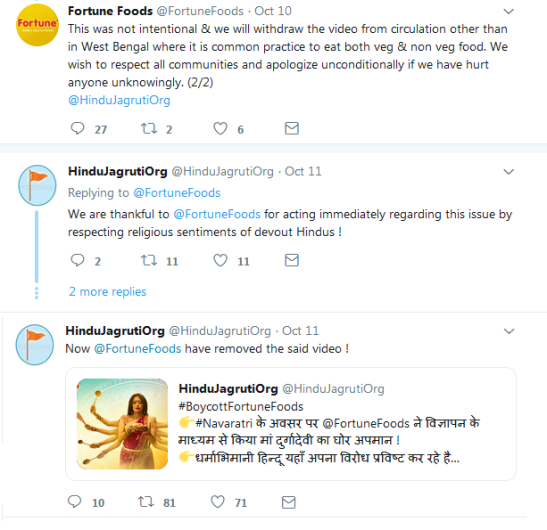 The social media and some media houses ran their wishful stories on it. And Fortune Foods highlighted a story in its twitter handle+ as published in Ei Samay (the Bengali daily associated with TOI) as made by its reporters Joydeep Sen and Mukul Biswas. The story was captioned as “Teler Bigyapane ‘Niramish’ Bitarke iti” i.e. “The ‘veg’ debate ends in oil advt”.

But the Hindu retaliation against the misdirecting people’s mind and humiliating Goddess Durga in a cooking drama engaged in preparation of non-veg items, cannot stop anyway until the culpable ‘Fortune Foods’ company of Adani Wilmar withdraws its advt. of “Pet Pujo, abar!’ completely from every domain in West Bengal or elsewhere including one from Sawan Dutta / THE METRONOME  in youtube.

In a intrigue the Adani Wilmar – Fortune Foods apologized for their advt of  “Pet Pujo, abar!’  and at the same time they kept the advt live in Bengali for the people in West Bengal. We are just not ready to bear any humiliation or vilification of Hindu goddess Durga any way any more.

Does Adani Wilmar-Fortune Foods dare to run any advt. of their food products during Ramjan or Christmas depicting Ayesha making food for Muhammad or Mother Mary making cake for Jesus? Then how they dare to make an advt. depicting Goddess Durga making non-veg dishes during Durgapuja? Enough is enough.

Unless, the Adani Wilmar-Fortune Foods does not withdraw its “Pet Pujo, abar!’ advt in Bengali from all domains, render apology afresh for their misdeed and ensure not to picturize Hindu gods and goddesses in a silly manner in in all their further advts; the millions of Hindu activists, supporters and well wishers of Hindutva movements and http://www.hinduexistence.org will simply boycott Fortune Foods Products, Kacchi Ghani Mustard Oil, Soya Oils etc.