Taking a Hindu name Ajay, Love Jihadi Ajmal Raes Khan married a Hindu girl after forcefully converted her, then gang-raped her on a reception party.

Oh Hindu girls… how many times ye will be victimized by Muslims?

MBA Hindu girl trapped in Love Jihad by a Muslim Hair dresser; extorted, converted and married forcefully; gang-raped by brothers-in-law and friend in a reception night finally in Navi Mumbai. 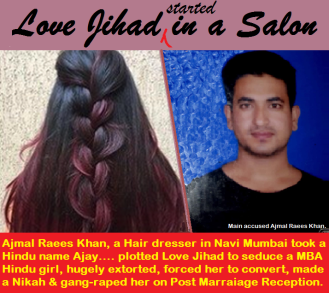 Sumedha Shinde | HENB | Mumbai | Aug 3, 2019:: A chilling plot of Love Jihad involving an MBA Hindu girl has come to light+ from Navi Mumbai, Maharashtra. The young girl, who ran her own advertisement business agency, developed a relationship with her hair dresser who introduced himself as a Hindu guy ‘Ajay alias Ajju’, whereas his real name is Ajmal Raees Khan. Falling in the prey of Ajmal, the Hindu girl was extorted many times for her better hair grooming and even for setting up a new chain of beauty parlors.  After Ajmal coerced her into a nikah (marriage as per Islamic law), the Hindu woman was drugged and gang-raped in her post marriage reception by her 2 brothers-in-law and one of their friends.

About one year back, the young girl came to meet Ajmal in a unisex salon located in a Vashi shopping mall where he used to work as a hair dresser and claimed as a owner of the salon. During her first visit in that salon, the hair dresser introduced himself as Ajju and managed to get her mobile number under the pretext of filling out a form to keep her informed about salon-related offers. The woman started visiting the salon often and spent thousands of rupees on hair treatment and styling.

During these period, their friendship turned into a love affair and all this while Ajmal kept up the facade of a fake Hindu identity. He even convinced the girl to give him lakhs of rupees for setting up his new beauty parlor chain with her. On 15 May, Ajmal called her to Bandra Court for marriage registration, where she discovered his friend’s real Muslim identity. After that, Ajmal coerced her into marrying him in a nikah ceremony conducted by a Muslim Quazi, despite her protest that she would not leave her Hindu faith. Before the marriage, the Muslim Quazi named Mohd. Islam Shaikh converted the victim from her parental Hindu name ‘Runali’ to Islamic name ‘Mehak’.

A few days after this plotted ‘marriage’, Ajmal started demanding Rs. 15 lakhs from her for a new proposal of business. Getting no money from the girl, Ajmal started harassing her over minor issues. He banned her from stepping out of their marital home in Vashi, and did not allow her square meals at any time. During the muh-dikhai rasam (a ceremony where bride meets and gets to know the friends and family members of her husband – a post marriage reception), she was drugged with a spiked cold-drinks and then gang-raped by her brothers-in-law Afsar & Shanu and one of their friend named Maqsood Rafik Ahmed overnight. The rape trail on the Hindu girl in that Muslim family continued for months, as reported.

Being dejected, the victim started living separately but she was still fearful of her husband as Ajmal came to her place to satisfy his bestiality. By then, her brothers-in-law also visited her house to persuade her to return, and again she was molested and tried to be raped by Afsar, Shanu and Rafik. Finally, the victim Hindu girl gathered the courage to lodge a complaint with a Vashi police station.

The victimized and heavily exploited and extorted Hindu girl took the help the Advocate and social activist Siddh Vidya, who managed the accused to get under law.

The victim girl has alleged that police is taking her case lightly and has removed the Love Jihad angel from her statement. She has lodged a written complaint with Mumbai Police Commissioner & Maharashtra CM Devendra Fadnavis regarding this.

Victim’s lawyer, Adv. Siddh Vidya, told that no investigating officer was present in court when the accused were brought for their first hearing, due to which the court had no option but to send them to judicial custody. She said that they would opposed any bail plea filed by the accused and inform the court about police negligence.

2 comments on “Taking a Hindu name Ajay, Love Jihadi Ajmal Raes Khan married a Hindu girl after forcefully converted her, then gang-raped her on a reception party.”