Colours of Holi smear minority Hindus in Pak but disrupted in Sindh University.

Colours of Holi smear minority Hindus in Pakistan off bit.

Sindh Uni Campus security guards detain a student who had been celebrating Holi and had allegedly been involved in a ruckus. Pic. FACEBOOK/FAYAZ ALI

HENB | Karachi | March 5, 2015::  Despite continuous threat from fundamental Islamic elements, forcible conversions and migration of minority Hindu and Sikh community of Pakistan, the minority Hindu community continues to celebrate its religious festivals off bit within a pity of the majority Muslims anyway.

As a matter of fact,  increasing cases of violence and lack of security against their community, many Hindu families from Balochistan and Sindh have fled away  Pakistan only to migrate into India. Rest usually try to forget their 24×7 oppression and persecution in some  days of Holi or Diwali, but there also exist the shredded stories of  stipulation ‘to do and not to do’. But, it is the life support of festivity to enjoy the last bit of living for the vanishing Pakistani Hindus.

Unfortunate. “Holi celebrations were disrupted at the Sindh University on Wednesday when around a dozen students marking the festival were allegedly roughed up by the varsity’s private security guards with police having to be called in.

Associate Professor Amar Sindhu, who heads the philosophy department, told The Express Tribune that a couple of boys, one of whom had had his shirt torn, came to her complaining about how they had been roughed up. Under the impression that the guards and police may have stopped the students from celebrating Holi, she spoke to the varsity’s security chief Ghulam Nabi Kaka.

“I felt outraged and fought with Kaka [over phone] but he assured that the university can never stop students from celebrating the religious festivities and the SU students and faculty celebrate Holi every year for several days.”

She added that Kaka had received complaint from some teachers of the Arts Faculty that some boys were creating a disturbance in the faculty’s garden, and that the guards had been sent to control the situation.

Kaka told The Express Tribune that they did not intend to arrest any student. “We acted to prevent the (alleged) fight from boiling over. The university has a history of small issues heating up into big clashes among students.”

He said the guards did not beat any student but only broke them up and pushed them apart.

Sindhu further confirmed that Holi celebrations were allowed to resume after the brief fight”.

But, this ‘brief fight’ sparked the anti Govt. students’ movement for Pakhtun sand Balloch solidarity helped the Hindu minorities to celebrate the next phase of holi in the Swami Narayan Temple ground in Karachi. 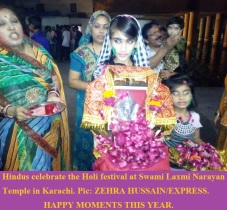 But, it was not needed any human shield or chain as such. Hindus of Karachi assembled Swami Narayan Temple to celebrate Hole, the festival life with colour.

Yudhvir Rana the TNN correspondent reports in TOI that “In a pointer to communal harmony against all odds, Muslims of Pakistan joined hands with minority Hindus to celebrate the festival of colours Holi for the first time in an even held at Jamshoro in Sindh province on Wednesday.

The CEO of Progressive Human Foundation (PHF) Chandar Kumar told TOI that the Holi celebration was held in rural Jamshoro, which was attended by people of other religions besides the Hindu community of Sindh.

A research associate with PHF, Samiya Rafiqe said she was mesmerized to see people crazily splashing colours at each other. “This was for the first time that I saw a riot of colours with people enjoying every moment of it,” she said. She said that celebrating and participating in each other’s festival only strengthened bonds between two societies and helps shed differences. The event was jointly organized by PHF and Pakistan Hindu Seva Welfare Trust (PHSWT), informed trust president Sanjesh Dhanja.”

Reports of Holi festivity also came in from Lahore, Pak Hyderabad, Chhakwal, Tharparkar. Quetta and some other places from Pakistan.

The Pak President Mamnoon Hussain wished Holi as a  time for rejoicing and conveying a message of festivity, happiness, charity, and acknowledged the valuable contribution made by the Hindu community in Pakistan in all fields.

Apparently the colour of Holi added some splashing colour of joy and happiness to the Hindus of Pakistan as there was no report of Talbani attacks of Hindus or abduction of any minor girls so far in the day of Holi.

Courtesy: Links and Pics used above.