Mamata Banerjee banned Durga immersion in WB on 12 Oct for Muharram! Why this ugly interference in the Hindu festivals?

Durga immersion banned on 12 October in West Bengal for Muharram! Why this unfair interference in the Hindu festivals in Bengal by Mamata Banerjee and her Police? 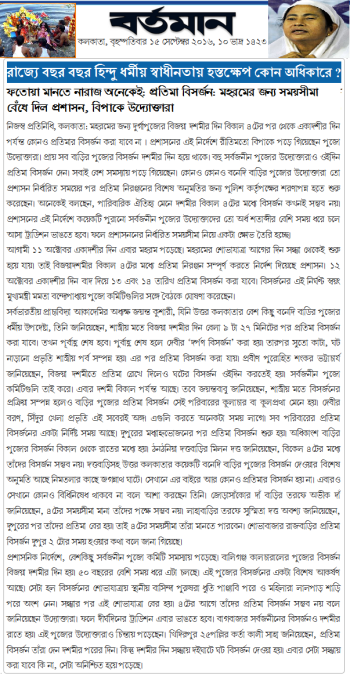 Upananda Brahmachari | HENB | Kolkata | Sept 15, 2016:: Hindus of Bengal is now taking otherwise to tolerate the frequent Govt interference in the Bengali Hindu’s major puja and festival like Durga puja in the row of consecutive three years. The Durga Puja organizers across Bengal are getting united to ignore the Durga Pratima Visarjan (idol immersion) ban on October 21 due to Muharram. West Bengal Chief Minister Mamata Banerjee said during a recent the ‘Communal Peace’ meeting that the immersion of idols will be stopped on October 12 as Muharram falls on the day. Thus the immersions are being deferred to 13th and 14th Oct accordingly.

This year, Vijaya Dashami falls on Tuesday (Oct 11) on which majority Hindus do not prefer immersion as convention. So, Hindus are likely to perform immersion on Wednesday, on the day the Muharram also falls this year and WB CM Mamata Banerjee bans Hindu’s Durga Visarjan Ceremony for the facility of Muharram on 12 Oct.

Meanwhile, various Hindu organisations including Hindu Jagran Manch are planning to file petitions in Calcutta High Court to prevent the WB Govt and Police for issuing any regulatory orders to ban or defer idol immersion on 12th October.

In Bengal, Durga Puja and Other festivals are banned or disturbed  in various places where Hindus are minority.

General Secretary of the Hindu Jagran Manch told HENB, “We are writing letters to 1,200 Puja committees to maintain all religious sacredness of Puja rituals according to Hindu almanac and not to be influenced by any politically motivated Govt orders”. They have approached 20 major Hindu Organisations including Bharat Sevashram Sangha and Ramakrishna Mission and asked them to find the solution of the Govt interference in Hindu festivals flouting Hindu calendar and Hindu customs.

A veteran RSS Pracharak (full timer) working in Kolkata Mahanagar (metropolitan) told HENB, “We got positive response from the puja committees last years. Local and organizers from the surrounding areas  immersed the Durga idol on the very Muharram day on 24 October last year without any trouble. If Govt wants peace and harmony, why they are not successful to allow both communities to observe their festival side by side. That is the good example of communal harmony.”

But, in Bengal, communal tension had happened before as well due to date clashes of Muharram and Durga Puja. Several deaths were also witnessed during the communal violence in 2013 and 2014. However, a senior police official said, ‘In any case, we will not allow the immersion of idols on this 12th October.

Chief Minister of West Bengal already announced that due to date clashing of Muharram and Durga puja, idol immersion would be banned on 12 oct.

Many of the Puja organisers even connected with TMC and families with their own traditional household Durga Puja are now accusing the Bengal Govt and its Police to put many restrictions on Durga Puja and its permission. “It looks like government will ban Hindu people from worshipping their Gods. Why Muslims are always given top priority in India than Hindus? Durga Puja is one of the famous festivals celebrated by India and especially West Bengal Hindus. It cannot be completed without the idol immersion finally according to the religious customs maintaining the date and time”, said a Puja committee Secretary in North Kolkata.

It is known from Brataman Bengali Daily, Govt. has prepared to issue the restrictions on Durga Puja immersion within 4.00 pm on Sept 12, 2016 and put a ban for the whole day of 13th.

Members of Durga puja committees are questioning, “Who has given the power to Mamata Banerjee to interfere in Hindu festivals  so whimsically?”

Interestingly, Govt never interfere the dates of Muslim festivals with changing mode. This year Muslims observed Eid-ul-Adha (Bakrid) in 13th Sept instead of 12 Sept as declared previously. Govt did not disagree.

Hindus in India do not enjoy such facilities, but Muslims can.