The Hindu History of Gorta acknowledged for its bloodiest fight against Nizam. 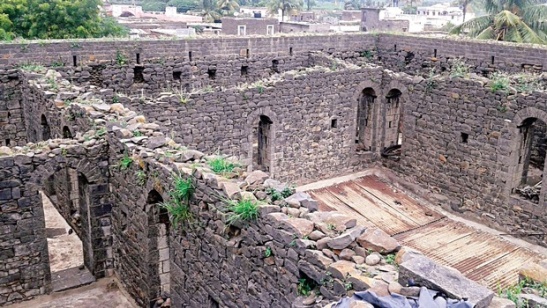 The house of Mahadevappa Dumane from where villagers of Gorta fought the Razakars and their army. The house was burnt down by Razakars on May 10, 1948; (below) the site where the proposed memorial and museum are set to come up | Express.

The Razakar havoc on Hindus by the Pre-edition of Owaisis….

This village in Karnataka demands its place in history for its bold Hindu struggle against the Nizam and Jihadi Muslims.

Ramkrishna Badseshi | ENS | Bidar | Sept 17, 2016::  As the state government gears up to commemorate the Hyderabad-Karnataka Liberation Day on Saturday, September 17, one tiny village in Bidar stands out as a symbol of the movement. Sixty-eight years ago, Gorta witnessed one of the bloodiest struggles against the Nizam’s rule.

It was over a year after India’s Independence, on September 17, 1948, that Hyderabad state was liberated from Nizam’s rule and joined the Indian state.

Three months before the liberation, in May 1948, Gorta village, which was part of Hyderabad state, witnessed a massacre by the marauding army of the Nizam, the Razakars. Almost 200 people were killed. Sixty eight years on, the village nurses one grouse: the absence of a memorial to commemorate this event and the fear that martyrs won’t be remembered for posterity.

The village in Basavakalyan taluk has a population of just around 3,000. But Gorta (B) holds a unique place in the country’s history and yet it remains unknown to thousands.

On May 8, 1948, at least 200 Hindu  people were killed when Razakars, a private militia organised by Kasim Razvi, attacked the village for the Nizam of Hyderabad. After India’s independence in 1947, Hyderabad state comprising Andhra Pradesh, Telangana, Hyderabad-Karnataka (which includes Bidar and undivided Kalaburagi and Raichur districts) and Vidarbha region of Maharastra were under the rule of Nizam of Hyderabad. The Nizam decided to keep Hyderabad independent, but the residents of erstwhile Hyderabad State began opposing the Nizam’s rule. But he suppressed the opposition with his army, Razakars.

At this time, Gorta was one of the Hindu villages that resisted strongly against the Nizam’s rule. On May 8, 1948 the Razakars entered the village on horses, armed with rifles and other weapons and killed around Hindu 200 people. The Razakars took the bodies to the Lakshmi temple there and burned  them.

In his book ‘End of an Era’, K M Munshi, food minister in Prime Minister Jawaharlal Nehru’s cabinet and Agent General in Hyderabad, writes about his visit to Gorta after the massacre. He and his team visited the village on May 17, 1948 and after inspection concluded that over 200 people were killed. He writes that though the massacre took place for two days on May 9 and 10, bodies were still lying around the village and panchanama (documentation of evidence) was not conducted till his visit. Munshi describes that the village resembled a graveyard and most villagers who survived the attack had fled. At the time, Munshi estimated a loss to the tune of `70 lakh.

Almost 68 years after the incident, Gorta is trying to hold on to its place in history. When this correspondent visited the village, he found four people who survived the 1948 massacre.

Maruti Parit recollects that over 500 people, including Razakars and their followers, came on horses, ransacked the village and killed over 200 people in three days (May 8-10, 1948). Parit expressed his unhappiness about successive governments not constructing a ‘Martyrs Memorial’ in the village nor felicitating those who fought the Razakars. They have not even been given a monthly pension.

Not yet a model village

In 2014, Prime Minister Narendra Modi announced the Saansad Adarsh Gram Yojana where MPs were encouraged to develop one village in their constituency as a model village. Bidar MP Bhagavant Khuba adopted Gorta to make it a model village, but the situation remains the same.

Speaking to Express, Khuba blamed the present state government. He said that MPs can’t spend money directly to turn it into a model village. “The state government has not cooperated to use the funds,” he said. Talking about the construction of a Martyrs Memorial, Khuba said it is the responsibility of the state government to build a memorial.

Muniraju Gowda, president of Gorta Hutatmara Smaraka Samiti, said that land has already been identified to construct a memorial and work has begun. He said, “It has been planned to erect a statue of then Home Minister Sardar Vallabhabhai Patel and build a museum which would explain the 1948 incident. A theme park would also come up at the site. The estimated cost of the memorial, including theme park, is around `2 crore. The Samiti has planned to finish construction in a year and half.”

Sharanaprakash Patil, President of Hyderabad Karnataka Region Development Board (HKRDB), said if the proposal for constructing a Martyrs Memorial is submitted to HKRDB by public representatives, it would consider the proposal.

This entry was posted on September 18, 2016 by hinduexistence in ANTI JIHAD, Attack upon Hindus, Attack upon Hindus by Muslims, Hindu Struggle, Hindu Unity, Islamic Menace, Islamic Terrorism, Jihad in Hindustan, Jihad in India and tagged bloodiest fight against Nizam, bold Hindu struggle against the Nizam, Fight against Nizam, Hindu History of Gorta (Bidar-Karnataka), history for its bold Hindu struggle, Pre-edition of Owaisis, The Razakar havoc on Hindus.