Akhada, the Ascetic Force to Protect Hindu Dharma for ages.

1. Meaning, origin and expanse of the word ‘Akhada’

A. Meaning : ‘Akhada’ is a distorted form of the word ‘akhand’, which means complete organisation.

B. Origin : When the Jain, Buddhist and Muslim sects came into existence in Bharat, Hindu Dharma came under threat. Hence, in addition to the mission of imbibing knowledge, the Akhadas raised weapon-wielding brigades to repel the foreign invasions for protecting the Sanatan Vedic Hindu Dharma and its followers and named them Akhadas.

C. Expanse : The Ascetics of all sects, from North Bharat to Godavari River are classiﬁed into 13 Sanghas. The 13Sanghas means 13 Akhadas.

There are seven such Akhadas.

Akhadas of the Shaiva sect

Adi Shankaracharya classiﬁed the united renunciants in the Shaiva sect into 10 groups.

These united groups are called ‘Dashanami Akhadas’. These Akhadas are of seven types. The chief Deity and ﬂag of each Akhada is different. Religious education and training in arms is given in the renunciant Akhadas of the Shaivasect. Hence, they emit Kshatratej (Radiance of a warrior).

There are 3 prominent Akhadas.

Akhadas of the Vaishnav sect

Other Vaishnav Akhadas are  –

There are two such Akhadas.

Besides these, Nirmal Akhada of Sikhs is also Udasin Akhada, which was established through the inspiration of their Dharmaguru Guru Gobind Singh.

2. The mission of Akhadas to protect Dharma 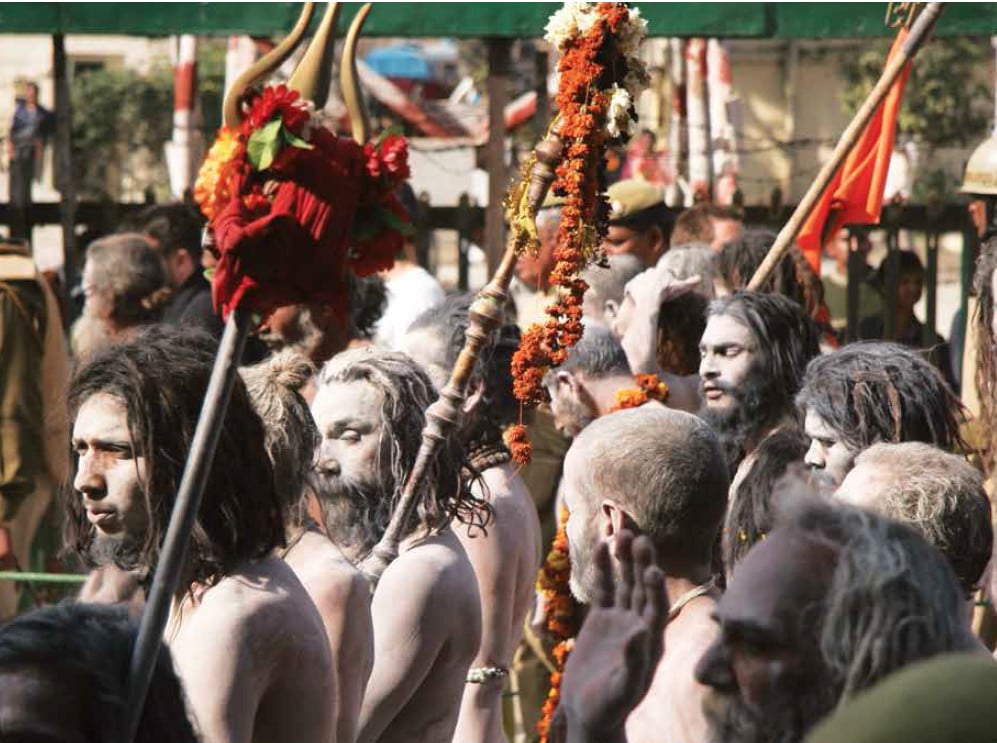 As the Hindu political powers became weak, the Ascetics and renunciants came forward to protect Dharma, so as to repulse the Islamic aggressors who heaped untold miseries on the Hindus. The Naga sect and Dashanamirenunciants came together and held spears as a weapon which symbolised strength. They began to give training in gymnastics and using of various weapons such as swords, along with lessons on religious scriptures. Two parts – ‘The weapon-wielding renunciants who preserve the ancient spiritual traditions’ and ‘The weapon-wielding renunciants who ﬁght for the protection of  Dharma’  were  created  among  the  Naga-Dashanami  renunciants. They performed the historic mission of protecting Dharma as given ahead.

A. In the year 1666, Aurangzeb attacked Ascetics and devotees in the Kumbh Mela at Haridwar. The Ascetics gave a ﬁtting reply to the attack. When Maratha soldiers in the Mughal army noticed saffron ﬂags of the Ascetics, they too fought against the Mughals. As a result, the Mughal army was defeated.

B. Innumerable Ascetics laid down their lives and repulsed the attack of Ahmadshah Abdali in 1748 and on Mathura in 1757.

C. The Mughal rule was eliminated from 32 villages in Jhansi under the leadership of Naga Ascetic Rajendragiri in from 1751 to 1753, and he hoisted the ﬂag of Independence in these areas. In the Year 1751, Bangash Afghan chieftain Ahmed Khan of Farrukhabad resorted to violence and loot at Prayag, and abducted four thousand high-caste women. At that time, six thousand Naga Ascetics who had gathered at Triveni Sangam for the Kumbha Parva united and attacked the army of Bangash Afgan chieftain. The Ascetics freed the abducted women and wounded many Afghan soldiers.

D. In the Year 1855, during the Kumbh Mela at Haridwar, Oumanandji (Guru of Swami Dayanand  Saraswati, Founder of Arya Samaj) and His Guru Purnanandji prepared a blue print for the First War of Independence against the British rulers in the Year 1857 and spread the blue print all over Bharat through the medium of Ascetics who had gathered from the entire country. During the Kumbh Mela at Prayag in the year 1858, Nanasaheb Dhundhu-pant, Balasaheb Peshwa, Tatya  Tope, Ajmulla Khan and King Kunvarsingh of Jagadishpur took an oath in the camp of Dashanami Ascetics in the presence of ‘Dast’ Baba to drive the British out of Bharat. Hundreds of Ascetics and Saints were present for the oath-taking ceremony.

Not only renunciants, but Bairagis too fought with arms many times against aggressors of other religions, and thus performed a major duty in the protection of Dharma. Despite being scholars, the armed Ascetics of Shaiva andVaishnav Akhadas gave great relief to the unarmed and peace-loving Hindu community. It is a historic fact that the aggression of Islam could be stopped on the border of Sindh due to these Akhadas.

3. Special features of the Akhadas

Almost all Ascetics associated with the Akhadas are experts in Holy scriptures as well as weapons.

A. All the Ascetics associated with an Akhada reside at one place in the Kumbh Mela, where they hold deliberations among themselves and plan for the future.

C. The renunciants who have performed spiritual practice for a minimum of 12 years or have acquired special spiritual powers get superior posts in the sectarian religious order.

D. The status of an Ascetic in an Akhada is decided after taking into account his spiritual ability and mental courage. While bestowing a status, there is no differentiating on the basis of caste or ﬁnancial position.

E. Strict discipline is observed in the Akhadas. Ascetics who do not obey orders are given severe physical punishment or monetary ﬁne.

F. There is a hierarchy of Mahamandaleshwar, Mandaleshwar, Mahant in each Akhada. The Brahmanishtha Ascetics, who are very humble, intelligent and have reached the state of Paramhansa are given these titles.

4 comments on “Akhada, the Ascetic Force to Protect Hindu Dharma for ages.”