Give equal rights to Hindus as are available to Minorities in India: Hindu Charter.

Upendra Bharti | HENB | New Delhi (Aerocity) | Sept 21, 2019:: Hindu Charter successfully organized a National Conference on Equal Rights for Hindus on Saturday (21 September) in New Delhi. The objective of the conference focused on to seek amendments in the Indian Constitution to eliminate discrimination against the majority Hindu community and to stop appeasement of Muslims and Christians in India through ‘Secular’ loopholes of Indian Constitution.

A draft resolution and Constitution (Amendment) Bill for the amendment of articles 12, 15, 19, and 25 to 30 was ready to be prepared at the conference keeping six main subjects (6 panel in fact) in mind. The conference took place at the Hotel Holiday Inn, Aerocity in New Delhi. 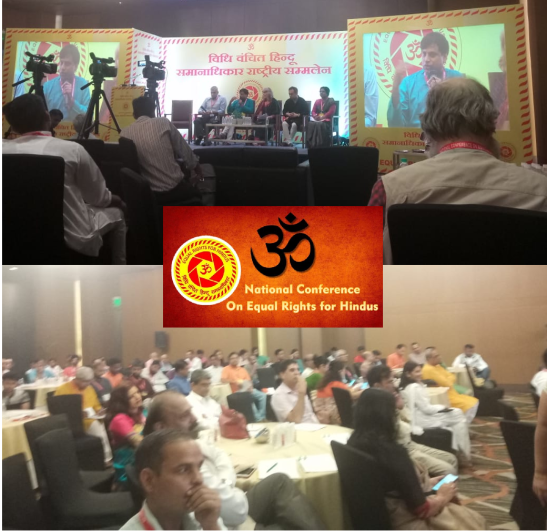 The panelists indulged into threadbare discussion to point out the secular latches of Indian Constitution to discriminate majority Hindu people through gross violation even in the frame of fundamental rights and in the name of minority development (read appeasement) and vote bank politics.

At the end of empaneled sessions, the Hindu Charter approved a Resolution and prepared a Draft of the Constitution (Amendment) Bill to be submitted to the Hon’ble PM & the Hon’ble HM requesting them to consider amendment of articles 12, 15, 19, 25 to 30 of the Constitution giving equal rights to Hindus as are available to Minorities in India.

The Hindu Charter team is to formally urge to Govt of India to facilitate propagation of “ancient civilisational knowledge” and to allow Hindus to “administer educational institution” on their own.

The participants expressed their “gratitude” to PM Narendra Modi and Union home minister Amit Shah for the “historic decision” on Article 370 and J&K which have “reintegrated the country”, said one of team members of Hindu Charter.

Eminent Hindu interlocutor and Hindu Existence Web Editor, Upananda Brahmachari expressed his satisfaction for the successful event of Hindu Charter on “Equal Rights for Hindus” held in Delhi and expressed his willingness thru his twitter handle to join the next event of #EqualRightsForHindus.

Taking his twitter handle Brahmachari retaliated, “What’s this stupid secular equality in India! End this game of More than equal and Less than equal. How minorities are treated as holy cow and majorities are as black sheep? To stop discrimination against Hindus, Govt must take action to amend earring Articles viz. 12, 15, 19, and 25 to 30 of Indian Constitution”.

3 comments on “Give equal rights to Hindus as are available to Minorities in India: Hindu Charter.”