Ban Muslim Personal Law Board for its anti-Hindu stance and anti-Constitutional stand. 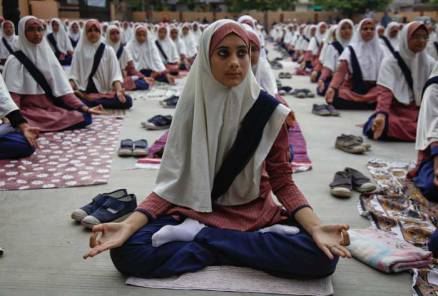 All India Muslim Personal Law Board (AIMPLB) must be banned for its anti-Yoga, anti-Constitutional and Subversive stands.

HENB | Haridwar | June 23, 2015:: Form the published report in Indian Express it is evident that the All India Muslim Personal Law Board (AIMPLB) slammed the Indian government’s move to push for yoga, saying it’s a violation of the secular Constitution, which does not allow the promotion of religious activities by the government.

Attacking on the NDA government, the AIMPLB has accused it of violating the Constitution of secular India and implementing the RSS agenda by introducing practices such as Yoga and ‘Surya Namaskar’.

The morons in AIMPLB perhaps forget that the International Yoga day on 21 June is now under UN agenda and more than 190 countries in UN made the International Yoga Day a huge success including making a Guinness Records as well. So, promotion of Yoga or Surya Namaskar as a part of Yoga are highly maintainable as per UN charter of promulgated for the member states under UN. Even these AIMPLB zealots do not care for the participation of 47 Islamic nations in International Yoga Day.

The filthy fundamental view posed by the AIMPLB is barely condemnable and this organisation must be banned by govt of India as it ratified the stand of some fanatic Islamic organisation like Islamic State against Yoga and Indian culture.

The AIMPLB is working against Indian constitution and its secular structure. This organisation is a threat against the majority people of India as it wants to promote Sharia Law in India by discarding various provisions of Indian Constitution and diferent parameters of Indian legislation and judiciary.

In its constitution, AIMPLB declares that, “To strive for the annulment of all such laws, passed by or on the anvil in any State Legislature or Parliament, and such judgments by courts of Law which may directly or indirectly amount to interference in or run parallel to the Muslim Personal Law or, in the alternative, to see that the Muslims are exempted from the ambit of such legislations.” or “To constantly keep watch, through a committee of Ulama and legists, over the state or Central legislations and Bills; or Rules framed and circulars issued by the government and semi government bodies, to see if these, in any manner, affect the Muslim Personal Law;” 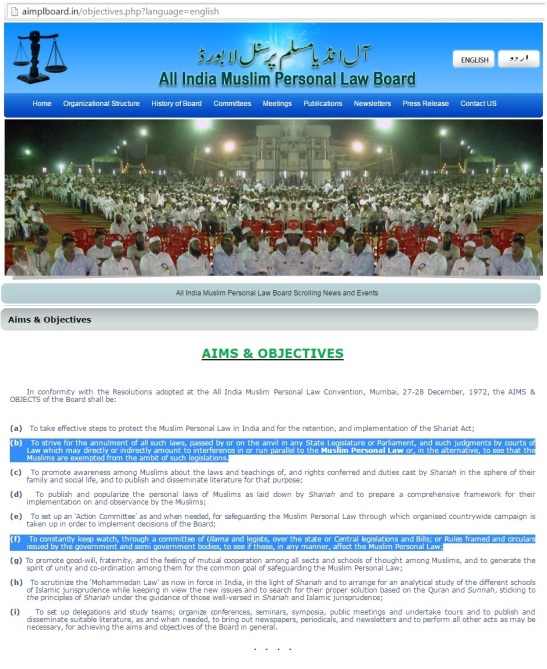 So, this organisation AIMPLB has its agenda to clash and contradict with the Indian system of legislation and judiciary with the ambit of propagation and Shariah and its menace.

Propagation of Jihad for the implementation of Sharia or Halal and keeping the Sharia upon the Indian Constitution must be a crime under various provisions of Indian Penal Code and Criminal procedures as effected to date.  Moreover the AIMPLB is creating disruption to the social harmony in Yoga lover people in India including the sizeable numbers of Muslim brothers and sisters having faith in Yoga and traditional values of Bharat.

AIMPLB is not only hurting the majority people of India, it deters the assimilation of Muslim people in the mainstream life of India.

In this context, All India Muslim Personal Law Board (AIMPLB) must be banned in India until it stops its chaotic activities against the Indian constitution, legislation, judiciary and  mainstream life.

Though this article is written in an Indian perspective, readers must think the global aggression of Sharia and Halal in most of the Non-Islamic countries. Like Jihad, aggression of Sharia and Halal are two dreadful components for spreading Pan Islam against all democratic and liberal inheritance in civil society. Generally, any Sharia body acts against everything which do not come under Islamic domain. That is a critical crisis waged upon non-Muslim world forcefully and most of the time brutally.

AIMPLB to campaign against Yoga Day and inclusion of Yoga & Surya Namaskar in school curriculum.

Minorities in Indian must change their mentality to challenge Majority concepts at random.

The threat of Sharia in Bharat (India) and the need of Uniform Civil Code.

3 comments on “Ban Muslim Personal Law Board for its anti-Hindu stance and anti-Constitutional stand.”