Students with a huge tri-colour and saffron flags in the march demanded strict action against all those elements who support “anarchism and anti-India propaganda”.

The students group said that the protest march near the university’s North Campus’ Art Faculty was organised to save the DU from “anti-national activities”. As the ABVP takes out rally in Delhi University, other varsities join in+.

Earlier, on Feb 28, angered by what they say is “stifling of voices,” hundreds of university students and teachers took out a protest march aimed at the ABVP as a controversy over free speech in the country gathered pace.

Faced with alleged rape threats and a virulent social media backlash, the young woman at the centre of the storm, Gurmehar Kaur, withdrew her protest against the ABVP, the ruling party-affiliated students group, which has been accused of browbeating those who support free speech.

The large-scale participation of Delhi University students, said to be largest in recent times, was remarkable given that the institution is not known for volatile students activism like the Jawaharlal Nehru University, whose students also added their voice at the march besides many eminent academicians and scholars of other colleges.

ABVP, which is backed by the RSS and BJP, faced criticism after it was allegedly involved in violence at Ramjas college last week. The pro-Azadi slogans and presence of  Umar Khalid in Ramjas college put the matter in the boil.

Several students and teachers of the college were beaten, allegedly by ABVP members, for inviting JNU students Umar Khalid and Shela Rashid to a seminar on free speech which was eventually cancelled.

The 20-year-old Kaur became the centre of the controversy after she launched a social media campaign against ABVP, which immediately drew threats of rape, allegedly by ABVP members, and ridicule by a Union minister, a BJP MP and former cricketer Virender Sehwag.

In comments that drew sharp criticism from the Opposition, Union minister Kiren Rijiju wondered rhetorically who was polluting her mind. He later said his remark was aimed at Leftists, and that Kaur was free to express her views.

Kaur is the daughter of Capt. Mandeep Singh who was killed in a militant attack in Jammu and Kashmir’s Kupwara district on August 6, 1999, four days after Pakistani troops withdrew from Kargil.

Today, as the march made its way through the North Campus of Delhi University, with hundreds of students of JNU, DU and Jamia, she tweeted, “All my friends. Our lovely faculty! how I wish I was there.”

Here is the highlights of the ABVP protest from Delhi University…..

3.15 pm: Meanwhile, this is what Justice Markandey Katju thinks about the ABVP.

2.50 pm: Outside Delhi University North Campus Arts faculty, where the protesters have now reached, a giant Tricolour is being waved with protesters saying they will not tolerate any student chanting slogans that ask for the disintegration of the country.

2.42 pm: With the Left and ABVP carrying out protest marches every other day, it appears the battle now is one of prestige and to see who emerges victorious in the battle to define what is nationalism.

2.35 pm: We are now getting to know that AISA is likely to hold a counter rally on March 4. A confirmation of the same is awaited.

2.33 pm: Reports indicate that ABVP student leaders are carrying posters showing BJP leaders who were killed in alleged violence by Left parties in Kerala. The move, perhaps, to instigate feelings of nationalism among students.

2.30 pm: Besides the ABVP protest happening today at Delhi University North Campus,  a Tiranga Yatra is being organised in Panjab University. The BJP Yuva Morcha is also carrying out a rally in Goa University today.

2.24 pm: It appears members of the ABVP are now turning abusive in their protest with tweets such as these coming from their handles and being retweeted from the ABVP official Twitter handle.

2.20 pm: Interestingly, the ABVP has also termed its protest as #SaveDU – similar to what the AISA and other Left organisations used during their campaign. Tuesday’s rally also had general students participating who maintained that they were not a part of any union but were just there to protest against campus violence allegedly by ABVP activists.

2.16 pm: How many police personnel are present at the march? The Delhi Police has reportedly deployed over 600 personnel at North Campus to ensure there is no violence during the protest march today and that law and order is maintained.

2.13 pm: In related news, Delhi’s Autorickshaw Sangh has decided that it will not offer rides to those who are anti-nationals. How it will determine who is and who isn’t we don’t quite know yet. We also don’t know if all the autos that are part of the sangh go by meter, which any good nationalist should ideally do. Read more about that here

2.08 pm: Meanwhile, Finance Minister Arun Jaitley has commented on the ongoing protests but stopped short of saying anything about the campus violence. “Nationalism is a good word, ye toh kewal iss desh mein hai ki rashtravad bura shabd hai (it’s only in this country that nationalism is give a bad conotation), says Arun Jaitley.

2.00 pm: Today’s protest by ABVP is the second in two days. On Wednesday, the ABVP protested outside Delhi Police headquarters in ITO, New Delhi demanding that the police take action against those responsible for ‘anti-national’ activities as well as those responsible for allegedly hitting their members at Ramjas college.

1.55 pm: For those travelling by road, Chhatra Marg that heads to Arts Faculty has been shut by Delhi Police as ABVP members have gathered on that road where the protest is taking place. So it is best to avoid it.

1.53 pm: At the protest, some of the placards read ‘Na Marxvaad, na Naxalvaad, Sabse uupar Rashtravaad’ (Neither Marxism nor Naxalism but Nationalism); ‘Kam padhe likhon ka apmaan karna band karo’ (Stop showing disrespect to those who are less educated).

1.50 pm: Here are some pictures shared by ABVP on Twitter where they claim over 10,000 students joined their protest march today at Delhi University’s North Campus. 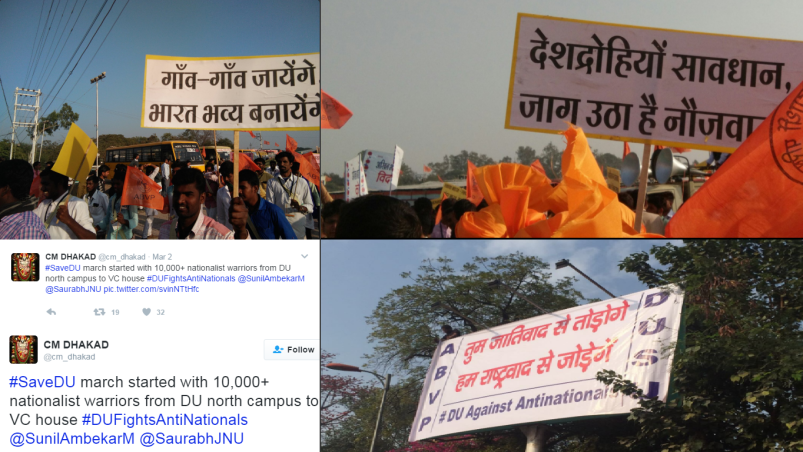 1.47 pm: Today’s protest will prove to be a tough time for the Delhi Police as they will need to share resources at Delhi University North Campus as well as at Jantar Mantar where there is a protest by Jat leaders. The Delhi Police has been facing a tough time following allegations that they did not take appropriate action during last week’s violent protest in Ramjas College.

1.45 pm: Ahead of the march, ABVP claimed that they would attract more students than those that attended the march called by student bodies including AISA against the Ramjas violence. Thousands of students had attended that rally on Tuesday.

1.43 pm: The Delhi Metro has shut metro gates at stations close to Delhi Univeristy. These include Vishwa Vidyalaya metro station.

1.40 pm: Satyendra Awana, speaking to reporters, said the reason behind the protest was to send a clear signal that ‘anti-national’ activities won’t be allowed on campus. “This is the main protest against the anti-national remarks made by students and this is not good for campus environment.”

1.30 pm: Protesters growing in number as students from various colleges joining in raising “Hindustan mein rehna hoga, Vande Mataram kehna hoga,” slogans. “Say no to Marxism. No to Maoism. We believe on Nationalism,” read placards held by the protesters.

12.45 pm: Protesters held placards that read ‘Anti nationals go back’ and ‘Save our campus’.

12.40 pm: Members of the the RSS-backed students’ union said the march was to reclaim DU from ‘left groups’ as well as protest violence against RSS and BJP workers across the country.